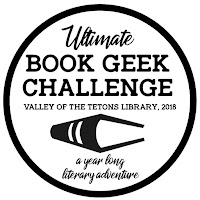 Our local library (where I'm lucky enough to work part-time) is doing a program this year called The Ultimate Book Geek Challenge. The challenge is to read 50 books in 50 weeks and they have to fit into a list of 50 categories supplied by the library. I didn't think I'd do it because I don't read as much as I used to and I wasn't that interested in the category idea.

But I started keeping track of my books, found that I was reading more than I would have expected, and thought it would be good to support my friend and fellow librarian, Rasheil, who is running the program. She said I could be kind of creative with the categories, too. Plus, if you succeed at the 50 books in 50 weeks challenge, you get a sweatshirt! And Rasheil said I could get one that zips in the front. So I'm going for it, and at this moment in August of 2018, I've read 33 of the 50 books.

In this post, I'll write about five of the books I've read and the categories they fill (or the categories I've shoved them into, though I reserve the right to shuffle things around later).

Category 1, a US President: Lincoln in the Bardo by George Saunders 🎧

When I was trying to figure out what to read for this category, a straight biography of a president sounded very boring, so on a whim, I downloaded the audiobook Lincoln in the Bardo, partly because it won Audiobook of the Year. Did you know there are Audie Awards for audiobooks? Since I buy audiobooks for the library, I really should know this, but I've only known for about a month.

I loved this book and the audiobook performance of it. I loved it so much that, almost as soon as it was over, I listened to it again. So it's going to count as two books.

The beginning was a little confusing, and I stopped listening to look at the text, just to see how it was organized, and after that it was like listening to a radio play, because it's written almost like a play, with different characters saying their piece. Interspersed throughout are tidbits real and fictional from contemporary accounts and history books about the time. It has a (very) full cast of readers, including Nick Offerman (Ron Swanson on the TV show Parks & Rec), David Sedaris, Kirby Heyborne (of goofy LDS movies fame), Rainn Wilson, Megan Mullally, Ben Stiller, and many, many others. Inspired by the apparently true story that after his son Willie died of Typhoid Fever, President Lincoln visited the cemetery to hold his son's body, Lincoln in the Bardo is bizarre, funny, heartbreaking, sometimes vulgar. It's narrated by spirits who hang around the cemetery, not quite understanding that they're dead and not going to recover from their "sickboxes," as they call their coffins. Their post-life states remind me of Dante's Purgatory and Inferno a little bit, though funnier and updated for a modern audience.

A warning: there is an extremely foul-mouthed couple and a few other indecent elements in the book.

This may not be the type of thing that was intended to go under this category, but there's some magic in it, so I'm going with it. I listened to this with my 12-year-old daughter and we had fun anticipating who might be the prince and how things would play out. It's a retelling of a fairy tale but not one that I know, so it wasn't too predictable. I think Shannon Hale is an excellent author, but this isn't one of my favorites of hers.

Category 17, about a US state or territory, Sourdough by Robin Sloan

This novel is not strictly about California, but I thought the state of California was a pretty strong character in the book. A software engineer at a robotics company in San Francisco inherits a sourdough starter from her favorite take-out place. She starts making bread and eventually selling it at a secret, quirky, high-end farmers market. I read the whole thing in one day. It's odd, surprising, and funny, bringing together a lot of elements that don't usually go together -- computer and robot programming, sourdough and other food cultures, Voltaire's Candide. I enjoyed it a lot.

Category 22, less than 200 pages: The Composer is Dead by Lemony Snicket 🎧

This is a lot less than 200 pages. It's a picture book with an accompanying CD that includes an original orchestral score that goes along with the story. It is hilarious, full of stereotypes about musicians that may only be funny to other musicians. The CD is narrated by the author and he does a great job. I love it and have made all of my kids listen to it several times.

When I found my 12-year-old reading this (sneakily borrowed from the library), I decided I'd better read it, too, so we could discuss. It's about two high school boys who are trying to beat the world record for kissing, so it's really about two boys kissing. Narrated by a chorus of gay men who died of AIDS during the '80s, it follows several gay and one trans boy in their various lives over the course of a day, all centered around the two who are going for the world record. The Chorus, like a classical Greek Chorus, observes the goings-on and comments on the modern world that is so much freer than the one they knew, rooting for the boys to find their ways through difficult family and other relationships. While a few parts are way too old for a 12-year-old, in my opinion, it's sweet and tender and positive and much better than I thought it was going to be.