Last Friday, we woke up to a hot air balloon coming our way: 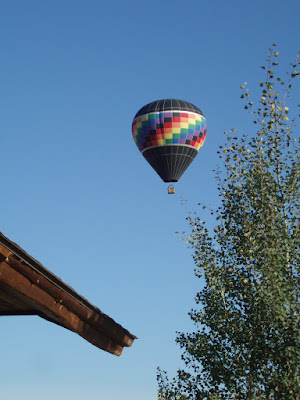 We often see them in the sky north of us, but they almost never come south. This one went almost directly over our house and then, to avoid power lines, went west and landed in a small park down the road. 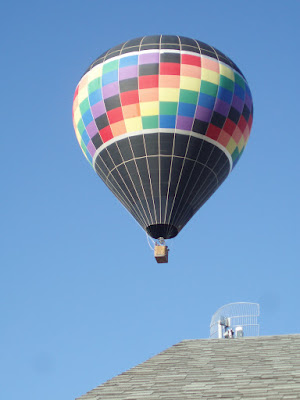 The kids and I drove the half mile or so to watch them take it down, and I learned a little about flying hot air balloons from one of the ground crew. (Now that must be a pretty boring job--following a hot air balloon in a van and trying to figure out where it's going to land.) Did you know there's no steering? Just up and down. Wind currents change direction at different elevations, so they steer by going up or down and seeing where the wind takes them. Interesting. And kind of scary. (Maybe they have a way of knowing which direction the wind is going. I don't know.)

That was our morning adventure. Friday's nighttime adventure was attending a star party at Craters of the Moon National Monument. Viewing conditions were perfect--no moon and no clouds, and it's far enough away from major cities that there's very little light pollution. A bunch of amateur astronomers brought their telescopes and let everyone look through them. We saw Jupiter and her moons (are planets she?), a ring Nebula, Andromeda, a few twin stars, like Polaris and the Cub Scout star, so named because one's yellow and one's blue (I didn't know there were twin stars that orbit around each other), and some other stuff. It was also cool just to sit back and look up. Beautiful.

The next morning, we explored Craters of the Moon for a while. It's a pretty weird place, full of only recently solidified volcanic rock. (Not recent like last week, but recent compared to the rest of the earth. Of course, Hawaii's volcanoes are even younger and some are still erupting, and Craters of the Moon certainly can't beat that. But driving a few hours and seeing volcanic stuff is a pretty good deal.)

Also, there were caves. This one was tiny (the picture was taken from the entrance) and it looked like a stone tent from the outside: 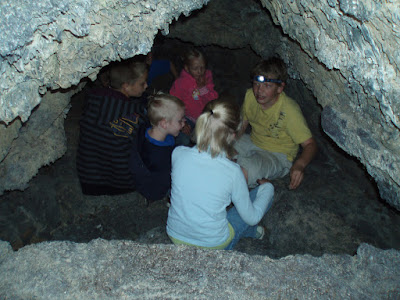 But other caves were pretty huge inside, and we could get far enough away from the entrance that we couldn't see any light from outside. I find caves slightly terrifying, but Jon talked me into going into every one of them, even though I wasn't wearing the best cave-exploring foot apparel: 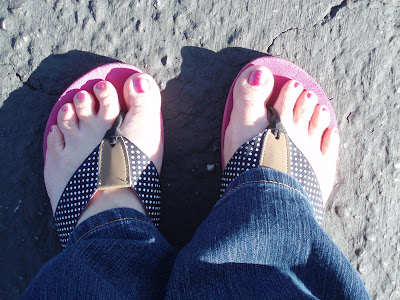 We had three adults and eight kids, the youngest two of which were four years old, and everyone did great. (I think I was the biggest baby, and I just kept my mouth shut most of the time. No need to frighten the young people by thinking out loud.) Jon would be so much more adventurous without me.