Showing posts from August, 2009
Show all

Book of a Thousand Days by Shannon Hale

By Erin - August 23, 2009
I started writing one of my typical quick reviews of this book, and then abruptly quit because while I was writing it, I read a blog post by the author about how to be a reader in which she questions the value of the question: "Did you like it?" As well as the answers thereto, of course. So I suddenly felt like I needed to write a really great review of this . And then nothing happened for a long time. I've decided a quick review is better than nothing, so here we go. It's based on a fairy tale I'm not familiar with called Maid Maleen (and if you follow that link, there are other links that are highly entertaining; Shannon Hale's website is funny and fun!). I loved it! And here's why: the narrator is the most reasonable character in the book, and yet she changes and grows, maybe more than anyone else. The writing is lovely but believable as a journal. So there: highly recommended!
1 comment
Read more

By Erin - August 19, 2009
This is surprisingly good for a first novel , especially considering that I thought for sure it was only published because of the author's connection to Stephenie Meyers, author of the Twilight books. (I have no idea what that connection is, but I am always suspicious of books that sport a giant, adoring quotation by a crazily popular author, and this is the case with Wings .) Wings has some similarities to the first Twilight book, in that it's about a not-quite-human character (vampire ... fairy ... whatever). But in this case, the narrator is the non-human, so it's about how she discovers her strangeness and learns to deal with it rather than how the narrator learns about it in someone else. Wings is much, much shorter, though, which is a good thing. I enjoyed it more than I thought I would. Aprilynne Pike grew up around here, too, which is kind of cool.
3 comments
Read more

Her Good Name by Josi Kilpack

By Erin - August 19, 2009
Another novel by Josi Kilpack that alerts her Mormon readership about worldly danger, this time identity theft. Kilpack's books are different from most LDS fiction I've read: they have realistic, sympathetic characters; aren't full of cliches; aren't full of grammar mistakes; have interesting and not necessarily predictable plots with plenty of tension. I wouldn't want to read them full time, but I enjoy them. And I think she's doing a good thing portraying normal LDS people who come up against stuff like identity theft and internet predators. She includes facts about her topic at the end, too. Sometimes Mormons can be a tad naive and gullible (I'm pretty sure there are facts to back up that assertion), so I think it's good that she's focusing on subjects like these.
Post a Comment
Read more

Night at the Museum: Battle of the Smithsonian (2009)

By Erin - August 17, 2009
I liked this sequel just as much as the original. It's funny and clever. And this time they go into paintings, too, which was a delightful twist. My kids loved it, too. (Okay, so they're not very hard to please. But I'm impressed with any movie that is entertaining for both kids and parents.)
1 comment
Read more

By Erin - August 17, 2009
Every novel I've read by Douglas Coupland has been wonderful, and Eleanor Rigby is no exception. I love how current and modern Coupland's novels are, and at the same time, there's always some kind of spiritual thing going on. Also, he captures so many things I've thought or felt but couldn't put into words like he does. He's one of my favorite authors, but I ration his works, so there's always something I can go read when I feel like it. Other Coupland novels I've read and loved: Microserfs (the first one I read); Shampoo Planet (Jon read an advanced release copy I got as part of a gag gift when I worked at the BYU Bookstore, and I teased him for a long time about it, because the title and cover were so ridiculous, and then I had to apologize to him about all the teasing after I read it many years later); Miss Wyoming (probably my least favorite, but I still liked it a lot); Hey Nostradamus ; Generation X ; Girlfriend in a Coma (which has lyrics
2 comments
Read more

By Erin - August 16, 2009
This novel kept me up until 3:00 am. Once I got about a third of the way through, I couldn't put it down. Josi Kilpack is a pretty decent writer of LDS fiction. Sheep's Clothing is about an internet predator and how he ensnares a good LDS girl. I admit that right now, as we're entering into our kids' teen years, I'm especially susceptible to books, movies, TV shows, etc., that portray the inner workings of teenagers. It's all kind of terrifying to me. So that was part of the appeal of the book. But also, I wanted to print out the emails from the Evil Internet Predator (in his guise as the nice girl on the East Coast) and give them to my kids as a test or something: "Find the sentence or sentences that expose this nice girl on the East Coast as an Evil Internet Predator!" Maybe I will.
Post a Comment
Read more

By Erin - August 16, 2009
I really liked My Sister's Keeper by Jodi Picoult, but I felt manipulated by Nineteen Minutes . Which makes me wonder if My Sister's Keeper was manipulative in the same way. I'm guessing yes. Someday I'll read something else by her, and then maybe I can solidify my theory that she has figured out how to write riveting but manipulative stories. Right now my theory is based on the two books I've read and the fact that she is a prolific and popular author (a novel almost every year for the last 17 years!). A pretty lame basis for a theory, but there you go.
1 comment
Read more

By Erin - August 16, 2009
I'm not a Trekkie. I've seen only bits and pieces of the TV show(s), and I saw one Star Trek movie back whenever, and that's about it. So I don't know how accurately the new Star Trek fits into the overall story, but I thought it was pretty good on its own. It was fun that Leonard Nimoy's appearance was significant and not just a cameo role. I liked it.
Post a Comment
Read more

On Beauty by Zadie Smith

By Erin - August 16, 2009
I loved White Teeth by Zadie Smith. On Beauty isn't as good, but I liked it quite a bit. There were times when I had the distinct impression that I was missing something, and if I took some time to read more carefully, I'd find something really great. I know, that's kind of lame on my part. But I enjoyed the book. (I'm not necessarily recommending it; it's pretty racy at times.)
Post a Comment
Read more

I go places, too! 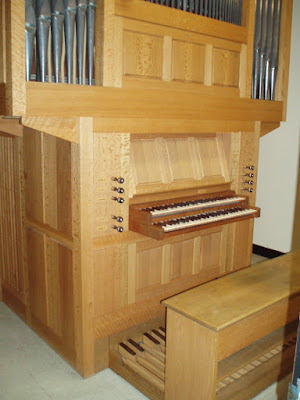 I realize that it's starting to look like Jon is out traveling the world! and hiking! and living life! While I just sit at home and read and watch online TV. But really, I get out, too. Behold one of the practice organs at BYU in Provo. Yes, it's a whole pipe organ inside a tiny room, just for practicing. There are many of these in the bowels of the HFAC (Harris Fine Arts Center), each sequestered in its own room, along with other practice rooms that merely contain pianos. (Bor-ing!) I used to practice on these organs when I took private organ instruction as a freshman and sophomore at BYU. My teacher was Douglas Bush, who is a world-renowned organist. I did not appreciate this at the time. Isn't there a saying about something wasted on youth? (It's late and my brain is shutting down. Also, I'm old and can't remember what is wasted on those ungrateful youth.) (By the way, the HFAC is named after Jon's great-grandfather, Franklin S. Harris, who was a
1 comment
Read more 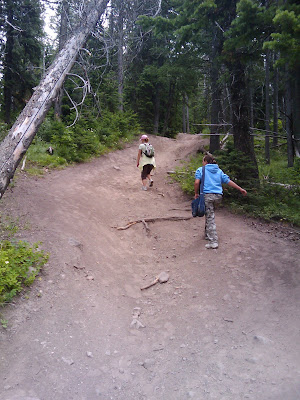 Today I hiked to Packsaddle Lake with girls from Darby Girls Camp, something like 30 girls and 7 leaders including myself. It's not a long or difficult hike, and it's pretty. (See note below, however!) Apparently the lake is an old volcano. The rope swing at the lake was really cool. Many of the girls gave it a go and had a great time: This was one of the suspected causes of the "except for ..." note above: I believe I was more eaten by mosquitoes than on any other hike I've been on. I don't like using bug repellent so I put up with a lot of annoyance before using it, but I finally gave in and still the mosquitoes were busy with me. It wasn't so bad at the lake itself or most of the hike back, I think because it was later in the day and the wind had picked up a bit. Just something to remember that you can't see in photos of beautiful scenery. :) Anyway, it was a nice hike.
2 comments
Read more
More posts