Beware of many knitting details below.

For Christmas, I got to give to my brother Colter, who is an artist and musician and one of the coolest people I know. He's interested in found objects and has created a lot of art using stuff he's found, whether it's someone's grocery list or a cardboard box or whatever. So I decided to knit him a sweater vest from already-used yarn. Ideally, I would have found some old sweater at a thrift shop, unraveled it and used that yarn, and I did try to do that. But the first sweater I found had been washed too many times or something and the yarn broke really easily. So my next best idea was to use yarn that I had knitted into part of a baby blanket about six years ago. Here's the beginning of Colter's sweater (on the left) next to a couple of panels of the blanket (on the right) before I unraveled them: 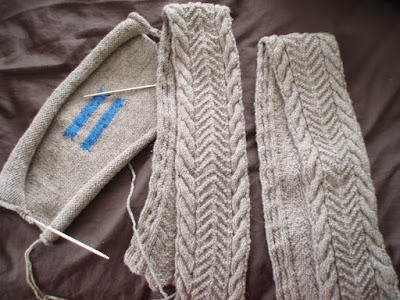 There's nothing quite like unraveling something you've knitted. You just pull and everything comes apart one row at a time. It's nifty and disturbing at the same time, because it's so easy to undo what's been done.

The main reason I chose to knit this blanket was to learn how to do cables, which I did, and then I lost interest, probably because its only purpose was learning to do cables, and I wasn't making it for anyone in particular. Anyway, I was happy to use the yarn for something else. (By the way, the yarn is Lion Brand Wool-Ease, 80% acrylic and 20% wool. It's from my earliest knitting days, when I hadn't yet discovered the expensive stuff. Since then, I've gone through a purist phase, when I wouldn't knit with anything that wasn't totally natural and usually expensive, to a more practical phase. Now I try to find yarn that's at least half natural but can still be taken care of relatively easily.)

So here's the finished product, displayed with enthusiasm and good humor by Mira: 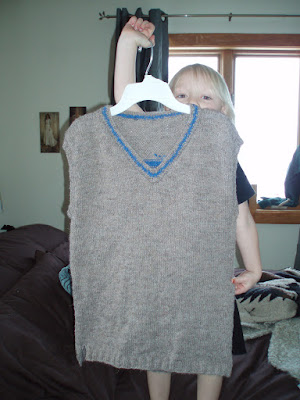 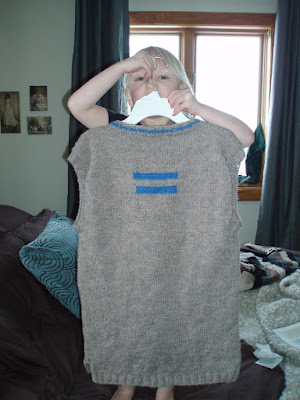 I always knit from patterns (unless I'm making a dishcloth) but I almost never use the right yarn and often mess around with the pattern some. I've been fascinated by the idea of knitting something without a pattern for a long time, just to see how it's done. Colter's sweater vest seemed like a good place to start. I used Wendy Bernard's book Custom Knits, which is a great book. There are lots of patterns for beautiful women's sweaters in it, but she also includes directions on customizing patterns and on knitting sweaters from the top down with just measurements, no pattern. Colter's sweater turned out slightly smaller than I would have liked (although Colter claims to like it), but that's a gauge problem that I often have even with patterns.

I love knitting top-down sweaters! It's so nice not to have to sew pieces together at the end, and you can see how it's all coming together right from the beginning. Way fewer seams is also nice. That's how Leah's sweater was knitted, too, and the pattern is from the same book.