A month is short

We are leaving Dresden on tomorrow morning (Wednesday) and heading to Berlin for a couple of days before we fly to Liverpool Saturday night. It turns out that a month goes by really fast! Well, I knew that before, but it has been confirmed yet again. There's a lot we didn't do, but I'm happy with what we did do.

We took a tour of the Volkswagon Transparent Factory, which was really cool (and now all the kids are planning to buy a custom-made Phaeton someday, for somewhere between 70,000 Euros and 180,000 Euros). We took the ferry across the Elbe River just a mile from our house and wandered around the beautiful gardens at Schloss Pillnitz. We walked around Altstadt, went into the three main churches there and checked out the cool courtyard and walls and fountains of the Zwinger.

My brother Colter came to visit us (and I have another post all about that in the works), and Jon, Zed, and Phin went to Warsaw, Poland. Jon took a few kids to Oybin to see the abbey ruins he remembered exploring as a missionary more than 20 years ago and they got to be in Germany and the Czech Republic at the same time (it's on the border). The next day he took a couple of different kids to Görlitz, his first city he lived in as a missionary. A member family fed them dinner and they got to cross the border into Poland, which Jon had only been able to gaze at longingly as a missionary.

This last Sunday, we all went to Zwickau, which was incredible. I didn't expect to be remembered -- I was only there for two months at the end of my mission -- but we were welcomed with open arms (and recognition) by the members, who have a comprehensive record of all the missionaries who have served there since the mission was opened in 1989. Next to a photo of me and my companion and Jon and his companion, our names were listed and someone had added a bracket uniting mine and Jon's name with a little infinity symbol and the date of our marriage. The Jähnert family fed us twice, lunch and dinner, and they and others picked us up at the train station and drove us around all day. Always with two cars, of course, because that's how much room we take! We met with other friends, too, and Jon found one old friend by showing up at her door. He'd written to her and called her and hadn't been able to contact her, but there she still was, in the same apartment 20 years later. (I'll just say that his memory is way better than mine. I can't even remember where I lived, although I did drag him to the area where I think our apartment was in Dresden.)

I went to lots of organ concerts and heard the organs in the Frauenkirche, Hofkirche, and the Kreuzkirche.

There was more, but I'm not going to try to fit it all in here.

A couple of pictures, though. Here are some of the kids walking to church across the Grosser Garten in Dresden. That is the summer palace in the middle of the garden. 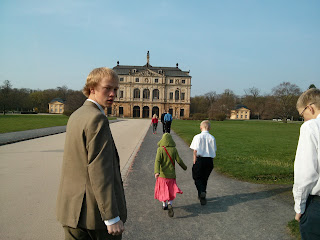 And here is Seth out to lunch with me on his 11th birthday. 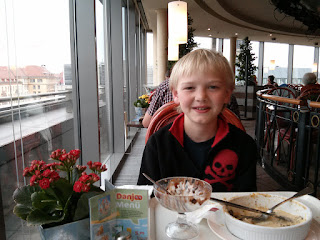