Thursday night I heard Christopher McDougall speak and read from his book Born to Run: A Hidden Tribe, Superathletes, and the Greatest Race the World Has Never Seen at Dreamchasers in Driggs. Thanks to Jeanne of Dark Horse Books for getting the word out on short notice!

Before the reading started, I milled around and learned about Dreamchasers owner Lisa Smith-Batchen's ultramarathon runs such as the 135-mile run through Death Valley. I think the extreme distance runs are intriguing and it's great that she has done that and lives here.

Chris McDougall's reading was very entertaining, as he discussed similar ultramarathons and a wondrous cast of characters, the Tarahumara Indians in Mexico, and the physiology of barefoot running. 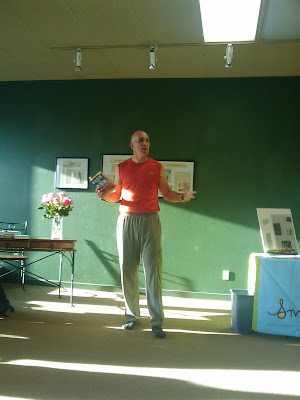 Hearing about ultramarathons is really intriguing but in a way that's awe-inspiring and distant. Since I'm still working my way up to my first 10 km run, hearing about 50- and 100-mile runs up and down remote mountains is tough to comprehend. For me the most motivational part was Chris's story of dealing with constant injuries on even relatively short runs, yet after age 40 finally figuring out what he needed to do and running 50 miles without pain. And that involved taking his shoes off. He related some studies that found the more money runners spend on shoes, the more injuries they have. And there are a few college track coaches who have their runners train barefoot (including one sponsored by Nike). 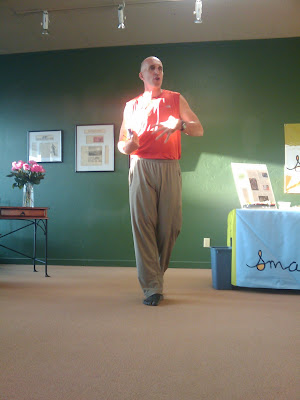 The talk was subtly motivational. I don't think I quite wanted to admit to myself that I had to try running barefoot for some (for me) nontrivial distance. A couple of years ago I read about people running barefoot and it just sounded like more "extreme" craziness. But the way Chris described it made so much sense I had to find out if it would work for me. He specifically likes running on pavement, which I avoid even with shoes on! How could that work?

The next day I had a chance to do it, so without overthinking it, I just went and did it. I knew I needed to go at least a mile just to get in the swing of things. It was about 4 in the afternoon, and the paved county road was hot, but not so hot as to be squishy. I figured if I never did it again, at least I would have tried it.

The run was fun! I had to pay more attention to the ground and deal with poky rocks and so on, but I loved it. It was a breeze, maybe the easiest running I've done, and it just felt great. At around one mile, I started to feel a blister forming on one foot, and considered calling it good but wanted to do more like my usual 5 km distance so it'd be an easy comparison. I ended up going about 3 miles, and toward the end ran on some fairly big blisters that made for an interesting experience as the road kept feeling hotter and hotter. But despite that it was a great experience that had me laughing several times and I knew I'd be (1) needing to take it easy for a few days and (2) doing it again.

I'm sure it would've been smarter to start slower, especially since I don't walk outside barefoot much at all. But it was great to impulsively try it and just find out for myself that it felt great on my feet-as-equipment and the only problem was the blisters. A "mere flesh wound" which I've had wearing regular shoes or hiking boots on occasion as well, so not any big disincentive.

The New York Times recently published the article Wiggling Their Toes at the Shoe Giants that talks about the seemingly fake controversy around barefoot running, drummed up by athletic shoe makers. The satirical post Barefoot Running: An Opposing View is a fun response to the naysayers. Because anyone who doesn't want to run barefoot doesn't have to anyway! Who cares?

Since I usually run on sharp gravel roads right by our house, barefoot isn't an option unless I go somewhere else or get a whole lot tougher feet than I have now. Plenty of people say it's not really about naked barefoot vs. cushioned running shoes as a binary decision. There's a lot more discussion about this on the web than I would've guessed. I'm already prodding Erin to get me a pair of Vibram Five Fingers for Christmas which should be a good concession to the terrain here.

When Lisa heard I didn't have the money on me to buy the book, she borrowed the money from someone else to lend me, even though she'd never met me before, so I was able to buy the book and get it autographed! Thanks, Lisa. Chris was a nice guy to talk to and I've already finished the book and thoroughly enjoyed it. I don't think readers need to be runners to enjoy it since it was a very engaging story in any case.

There's tons more in the book: food, mountains, narcotraficantes, biology, history, prehistory, competition, cooperation, and sex differences in running endurance that I didn't know about. Apparently the fastest women never beat even middling men in short races, or even marathons. But in races over 50 miles, women routinely win over men by large margins.

The biggest lesson seems to be: relax and have fun. Which is hard to argue with.