On Monday, we went with the missionaries to Asenovgrad, a 25-minute train ride from Plovdiv. In the train on the way, we met a nice couple who were delighted with our large family. They were happy to tell us that they have six grown children, including two sons who live in Paris with their families. They especially liked Mira, who, they said, looks like one of their daughters did when she was young. The woman gave Mira a couple of coins and was concerned that she might be cold (I understood that one sentence, because it's similar in Czech). I was happy to have the missionaries there to translate for us, although I did manage to tell them in Bulgarian that we have six children. They wished us life and health as we parted ways in Asenovgrad.

Asenovgrad is a small town that is famous in Bulgaria for making wedding dresses, so we saw lots of seamstress shops with amazing wedding gowns and other fancy clothes in the windows as we made our way through town towards the mountains nearby. We also went inside this Bulgarian Orthodox church, where a friendly woman told us a bit about the church and the saint they were celebrating that day. (I think it was a saint.) 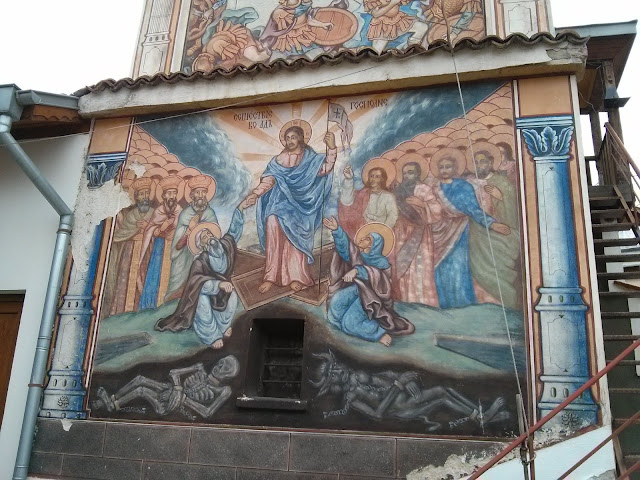 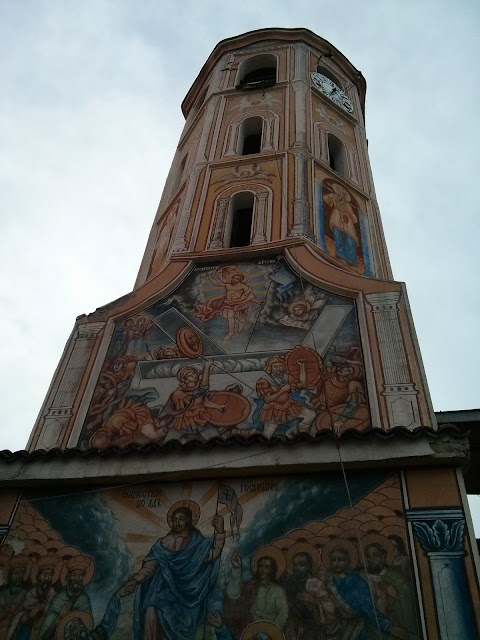 We took a hiking trail out to Asen's Fortress, encountering a small church like this one along the way. (These photos are of one beyond the fortress, but it's similar to the first one we saw.) 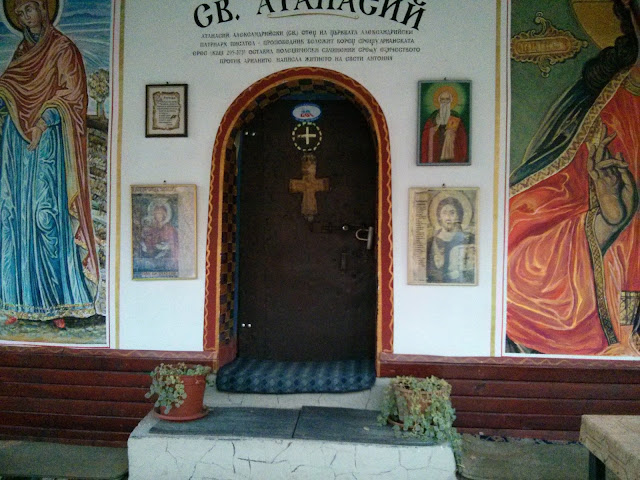 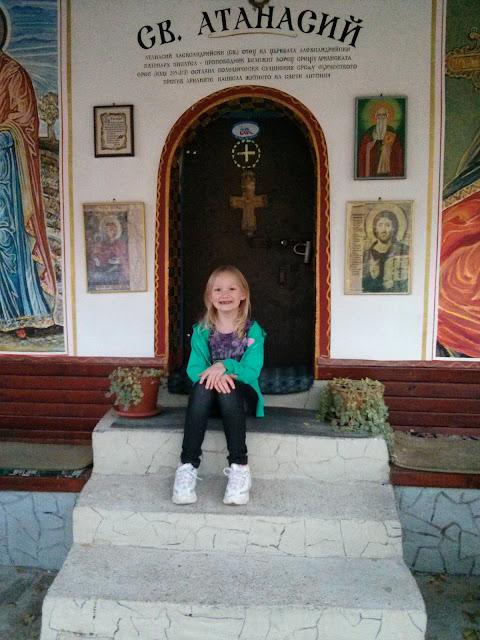 I don't know the reason for the tiny door, but the churches seem to be in use, at least during warmer months. There were picnic tables and benches outside, along with smaller tables and chairs, outdoor wood stoves, and mountain springs with running water. It was a nice hike, with great views of the town below and the mountain fortress ahead.

From Wikipedia about Asen's Fortress (linked above):

The earliest archaeological findings date from the time of the Thracians, the area of the fortress being also inhabited during the Ancient Roman and Early Byzantine period. The fortress gained importance in the Middle Ages, first mentioned in the statute of the Bachkovo Monastery as Petrich in the 11th century. The fortress was conquered by the armies of the Third Crusade.

It was considerably renovated in the 13th century (more precisely 1231) during the rule of Bulgarian tsar Ivan Asen II to serve as a border fortification against Latin raids, as evidenced by an eight-line wall inscription. The foundations of fortified walls (the outer ones being 2.9 m thick and preserved up to a height of 3 m, originally 9 - 12 m high), a feudal castle, 30 rooms and 3 water repositories have been excavated from this period....

Taken by the Byzantines after Ivan Asen II's death, the fortress was once again in Bulgarian hands at the time of Ivan Alexander in 1344 only to be conquered and destroyed by the Ottomans during their rule of Bulgaria. 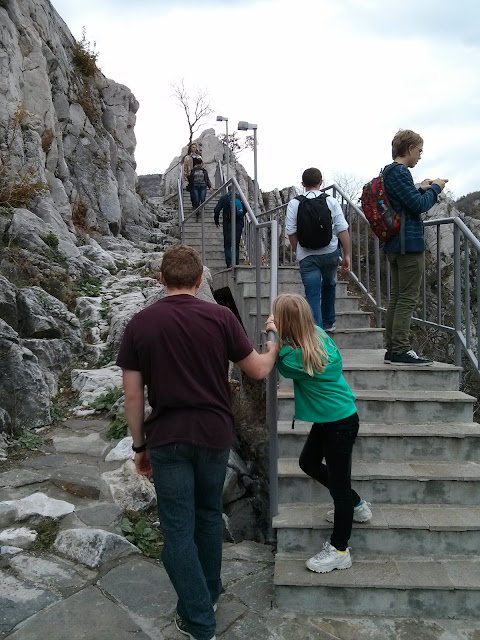 There were several replicas of medieval war machines built by the EU a while back. 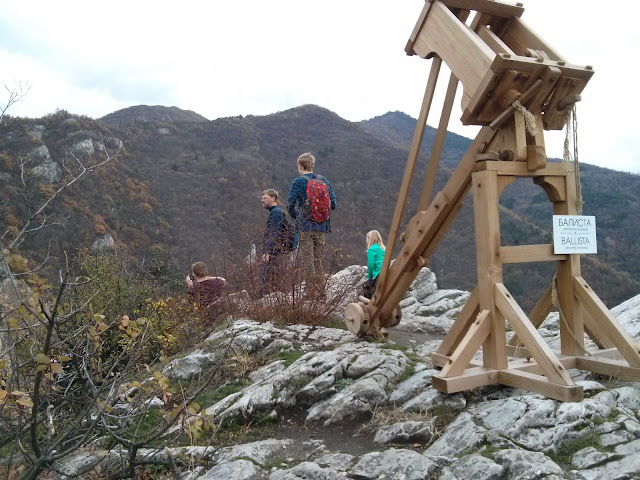 Again from Wikipedia: "The best preserved and most notable feature of Asen's Fortress is the Church of the Holy Mother of God from the 12th-13th century." 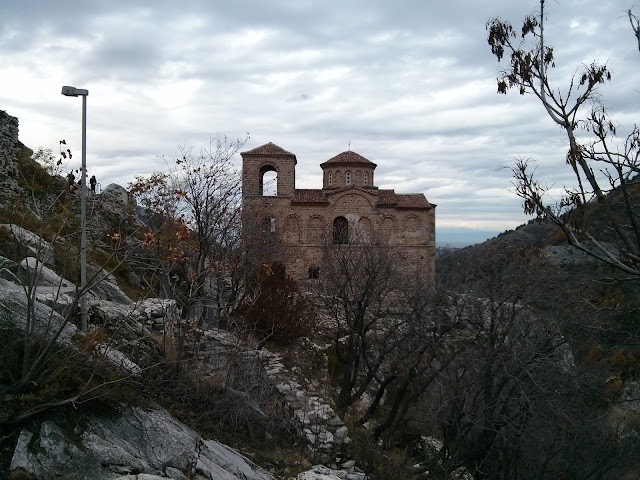 I had to step away from the edge here. It's really high up! Down below is the narrow way into the town that the fortress guarded (the town is to the left). 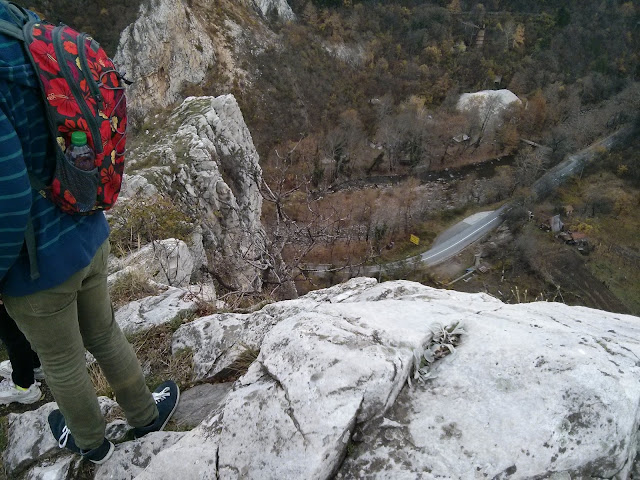 That's Seth way up at the top of the fortress ruins below the flag. The church is to my right (outside the photo) at about the level I'm standing on and the scary ledge is behind me. 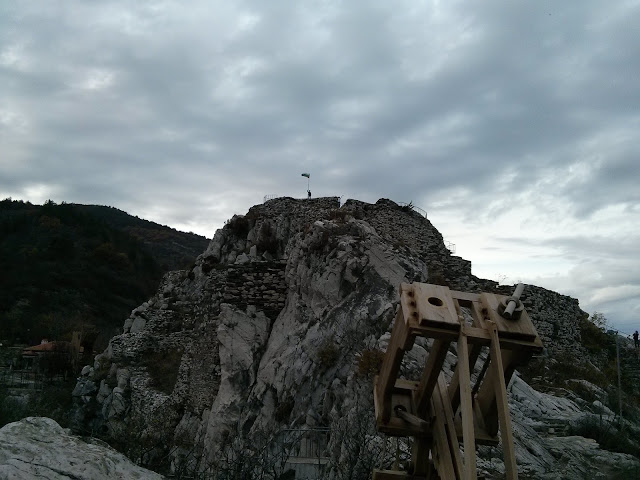 More of the scary ledge. Scary to me, anyway. 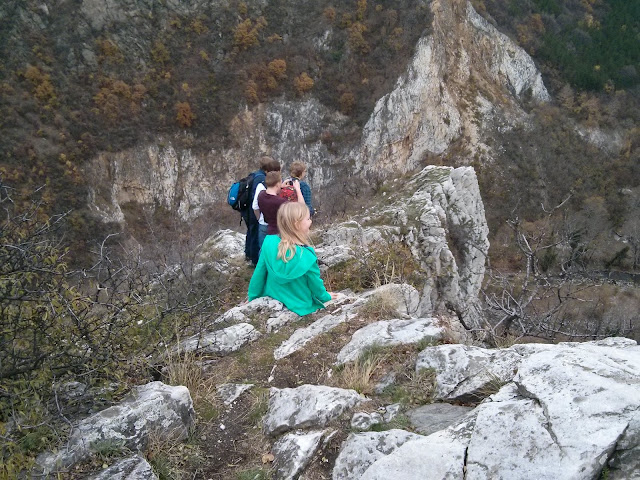 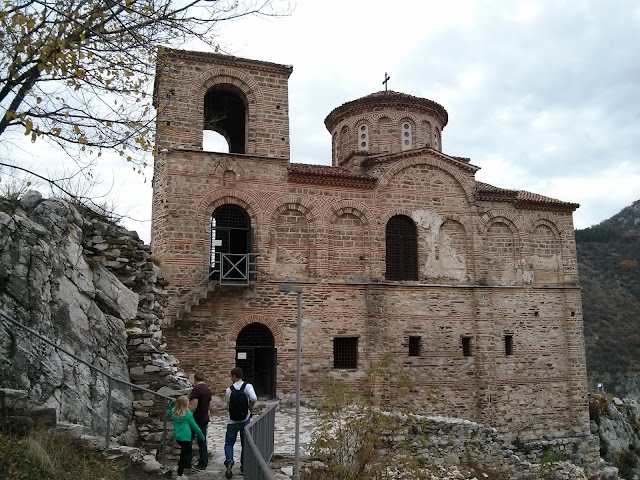 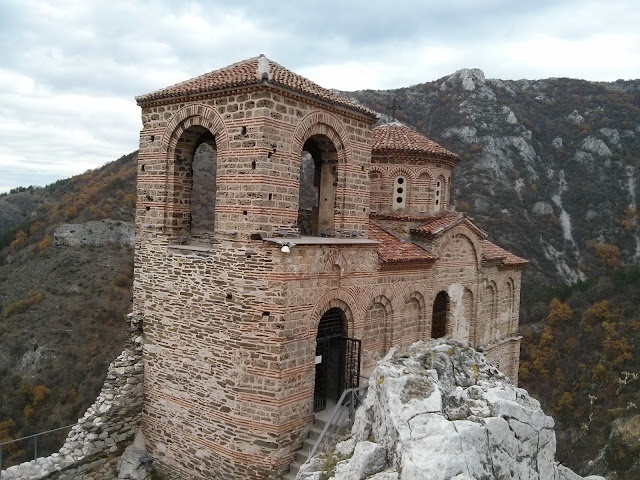 View of Asenovgrad through a fortress window. 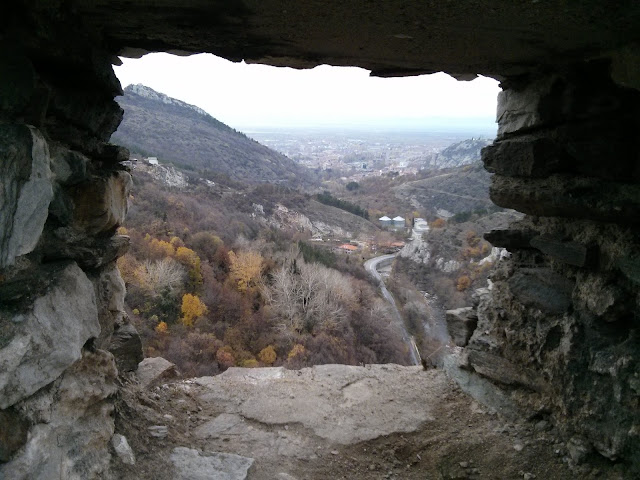 From the top of the fortress ruins. 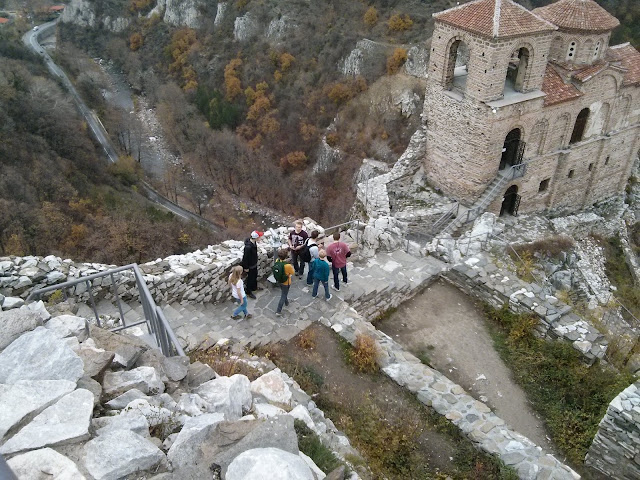 Inside the church, which is still, or rather again, an active Bulgarian Orthodox church. The mural paintings (many only partially intact) are from the 14th century. 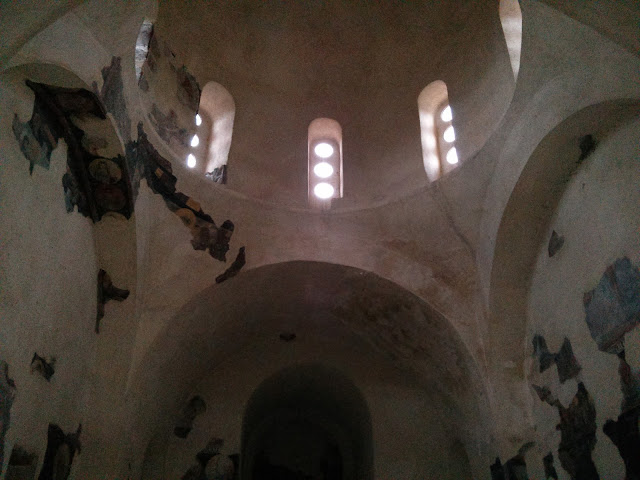 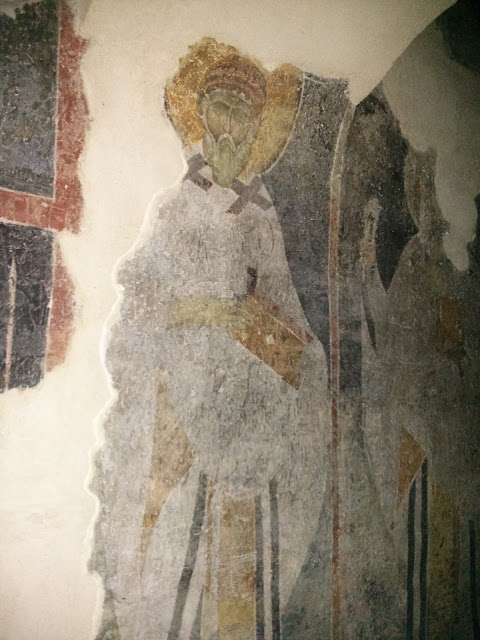 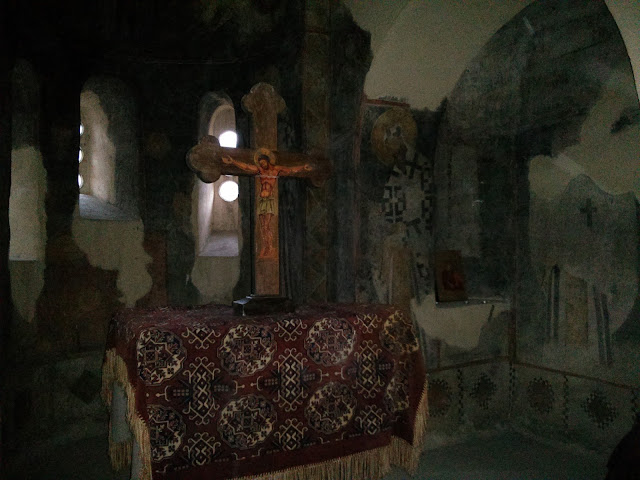 I don't know what story this painting in front of the altar is about, but it's intriguing and apparently violent! There are coins lined up along the bottom of the painting. 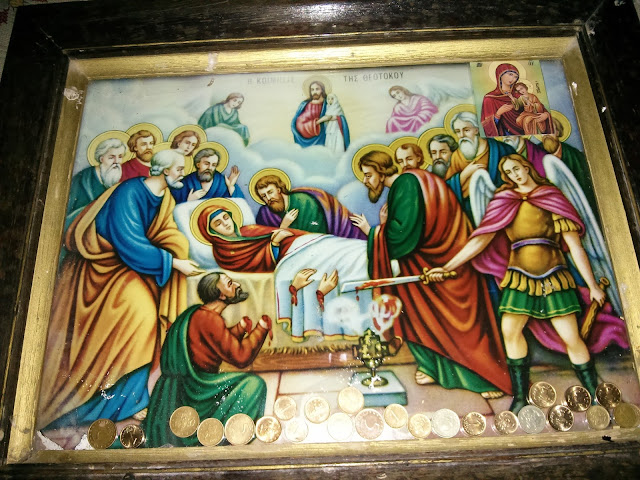 And here are the kids in some kind of crazy action shot. But the mural paintings are cool. 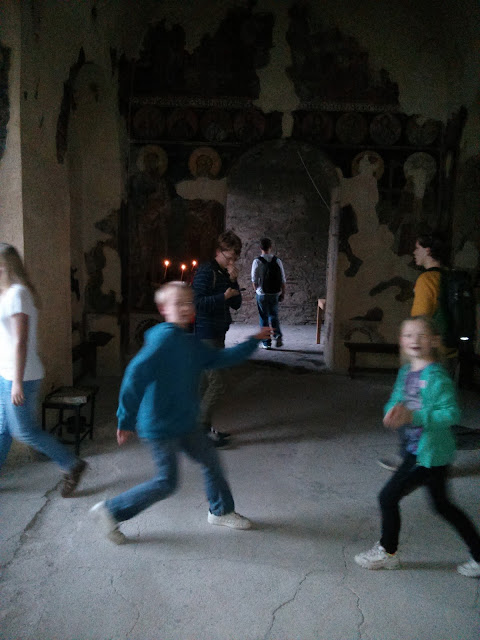 It was a great day and we hope we can go back sometime and explore more of Asenovgrad, which has lots of little churches and hiking trails and a nearby monastery we'd like to see. We walked about ten miles in all!