Phin and I visited Vagharshapat, Armenia, about 18 km away from Yerevan. There was supposedly a marshrutka or bus that went there, but we couldn't find it and ended up taking an absurdly cheap old Lada taxi out there with a friendly taxi driver for about $2.50. The driver on the way back was less friendly and despite us agreeing on a fixed price before leaving, he tried to get more money out of us than agreed upon when dropping us off. Which we didn't go for.

The city was known officially during Soviet times, and unofficially still, as Ejmiatsin or Echmiadzin, after the name of the Etchmiadzin Cathedral, the central cathedral of the Mother See (spiritual and administrative headquarters) of the Armenian Apostolic Church.

I read that the original cathedral was built in the years 301-303 by St. Gregory the Illuminator, and the current one dates to 480, with a stone dome added in 618. The cathedral had scaffolding up when we visited. We went inside briefly, and continued to listen to the beautiful music during a church service from outside. It echoed around the courtyard and was my favorite part of the visit. 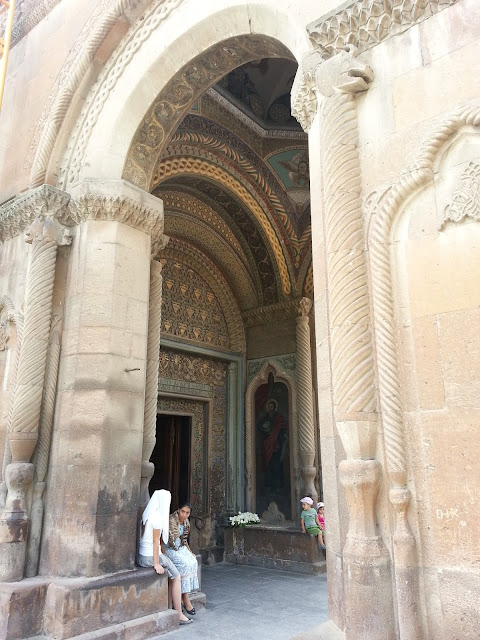 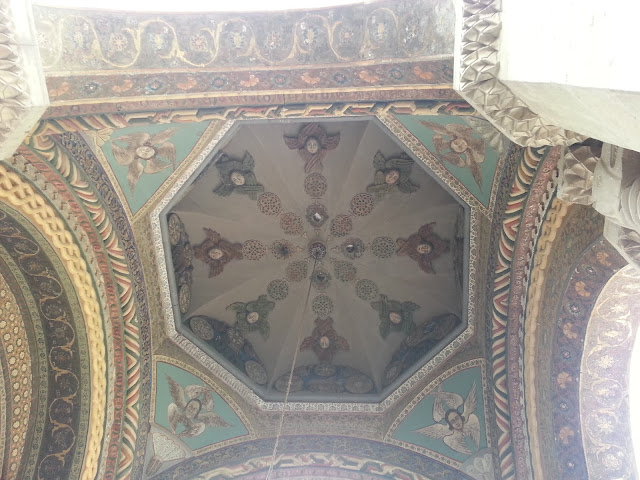 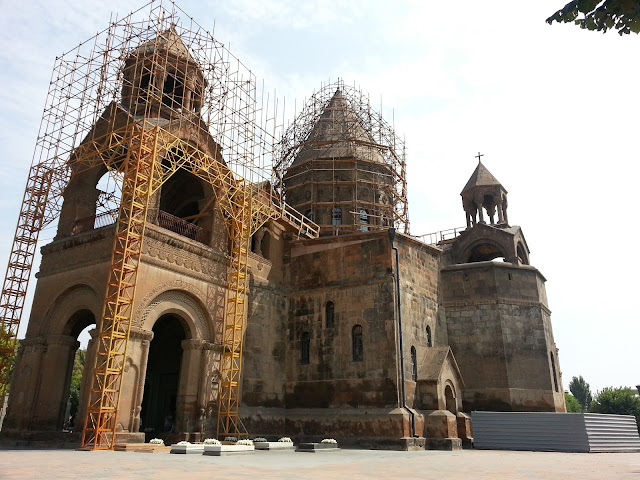 Here is someone else's photo when it wasn't under construction, from Wikipedia:

I wish we would have read more about it before we visited because there was very little information or guidance there on site for visitors. Even the bookstore didn't have simple tourist maps that we could find. We did meet a monk who had lived in the United States for a couple of years and was very friendly and gave us some pointers. And there's plenty to read on the Armeniapedia Echmiadzin Cathedral Compound article and the articles I linked at the beginning of this post.

Here are photos from our walk around the compound grounds: 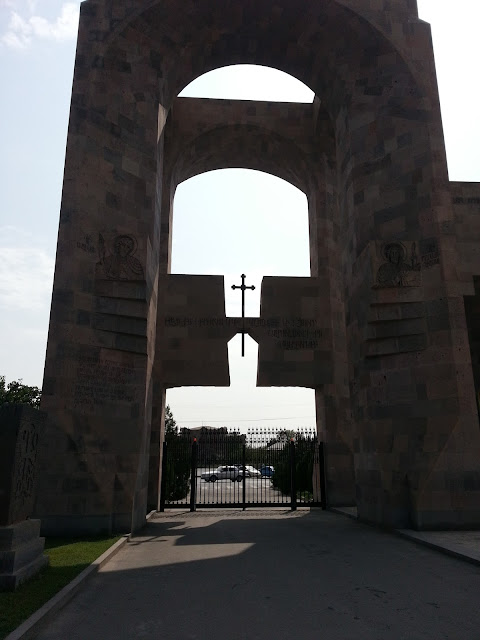 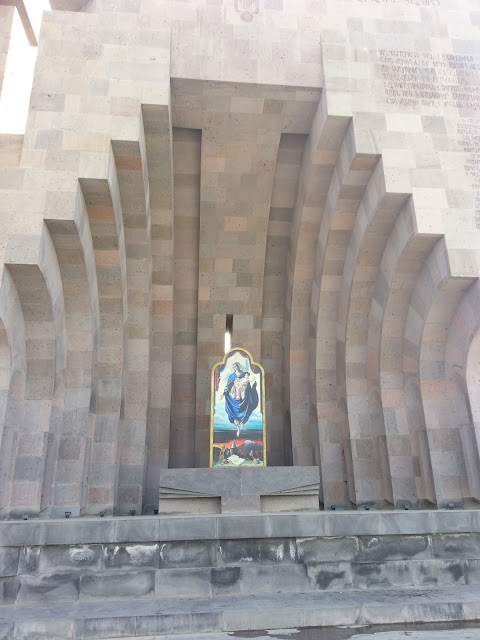 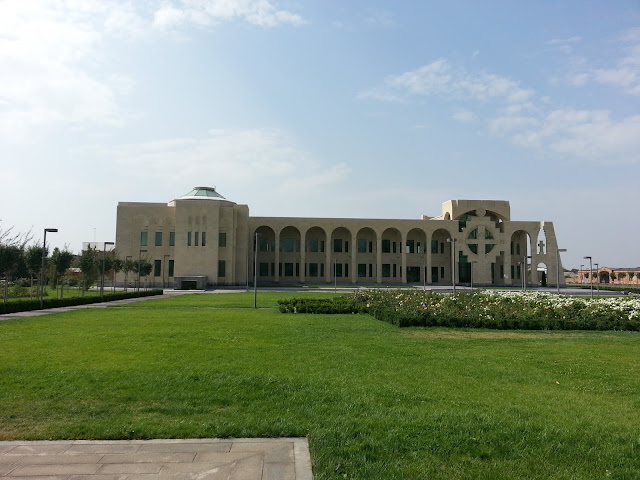 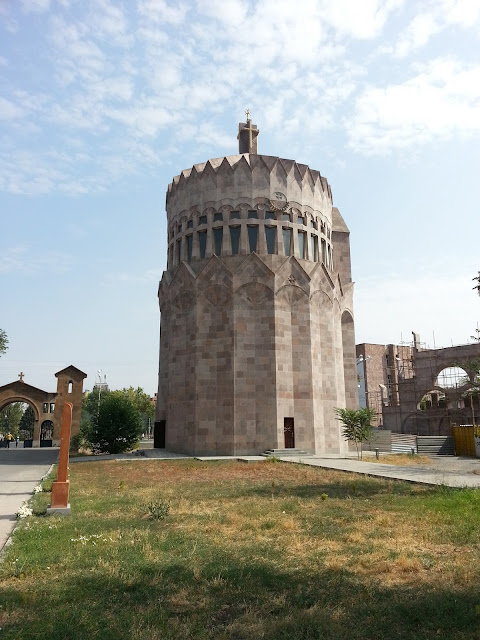 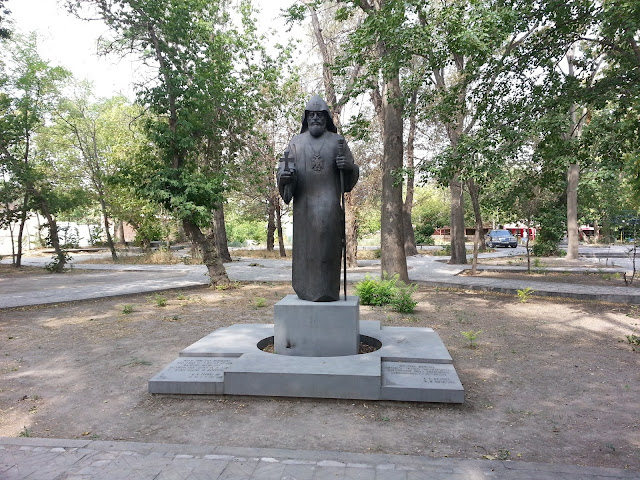 This was someone's amazing house in town: 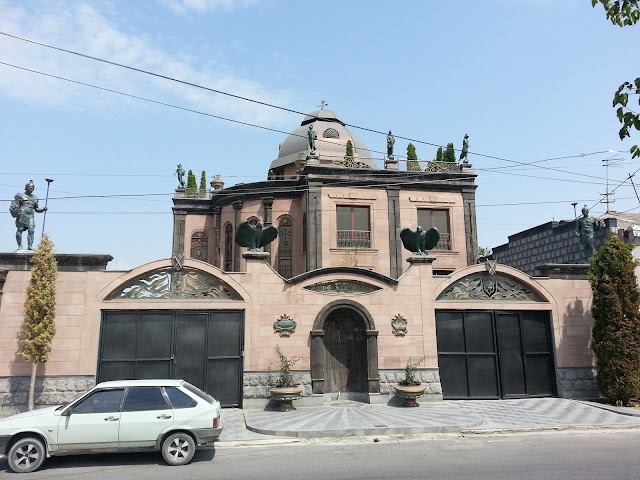 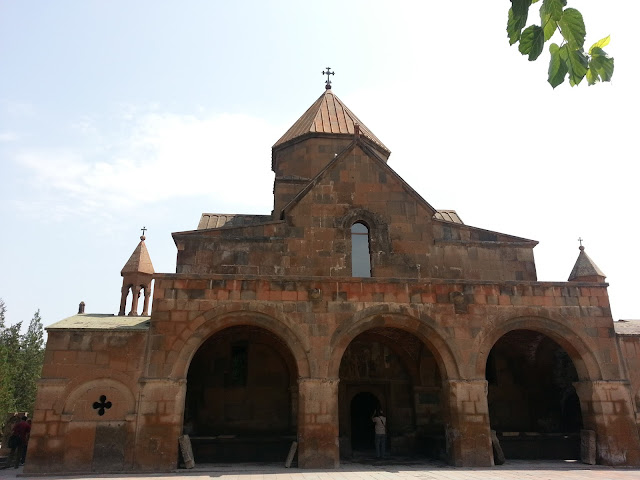 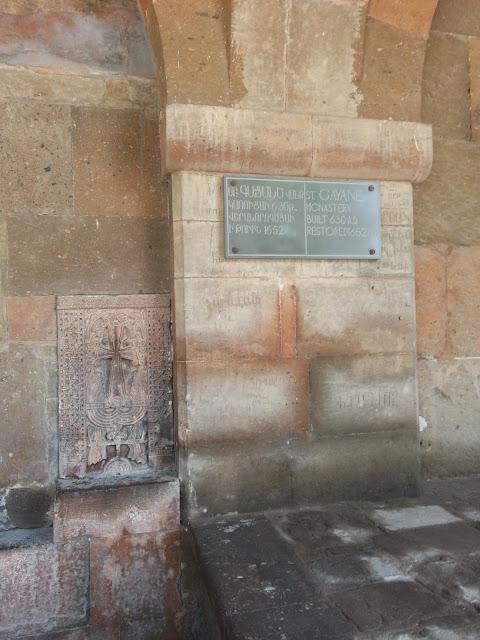 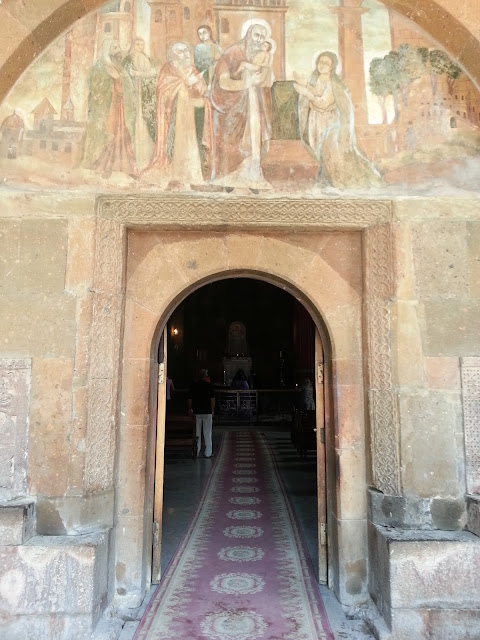 As we often saw in Armenia and Georgia, people had grapes growing in front of their houses above the sidewalk: 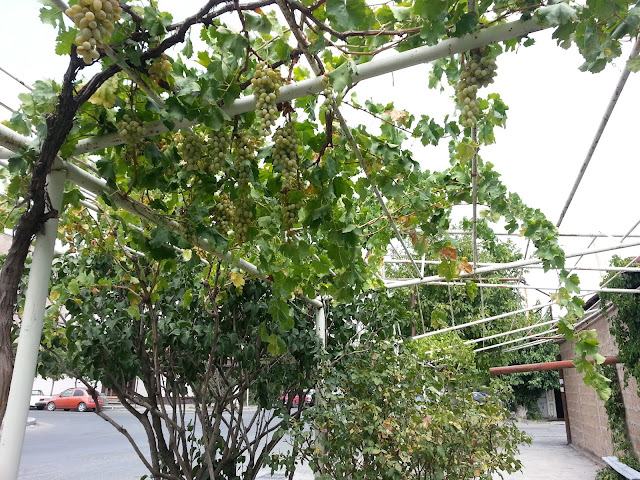 This was a school, I think: 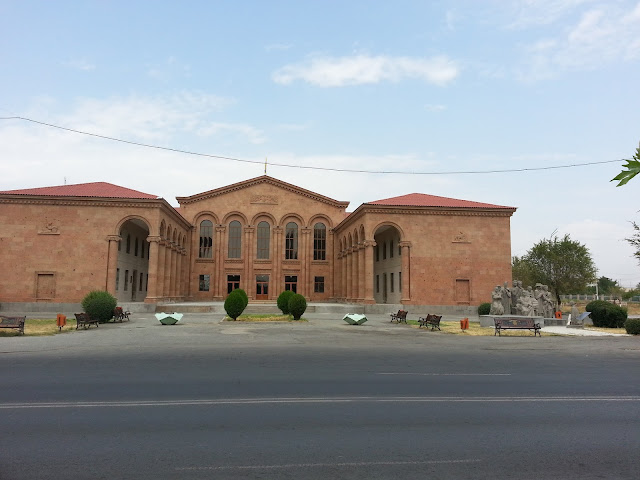 St. Shoghakat temple or church was built in 1694, on the remains of a 6th-century church. It had very nice grounds. 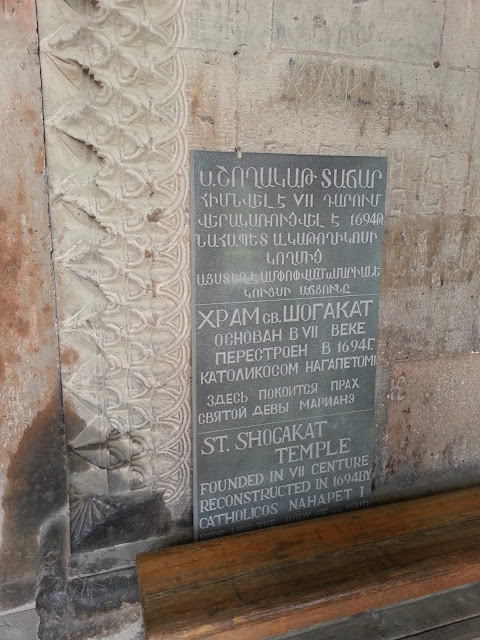 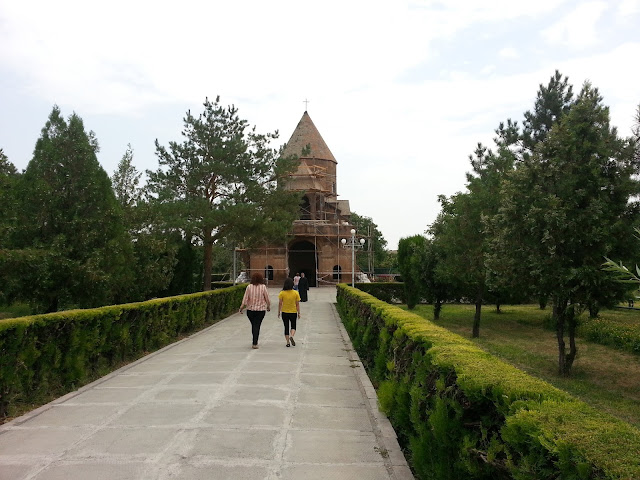 Phin loved these rain gutter drains with dragon mouths cut into them: 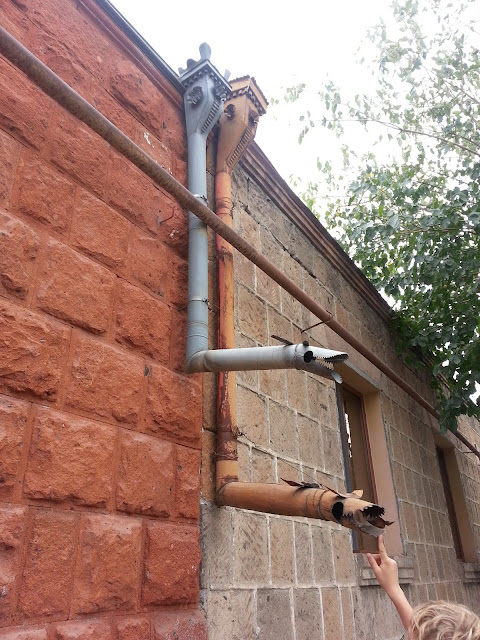 Watch out for the lion eating the snake: 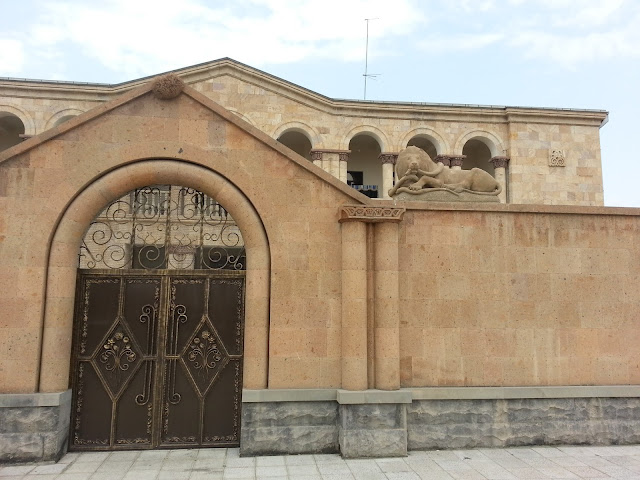 This is St. Hripsimé Church, built in 618 and said not to have changed much since then. It was one of the nicest churches in Ejmiatsin for us to explore as visitors. 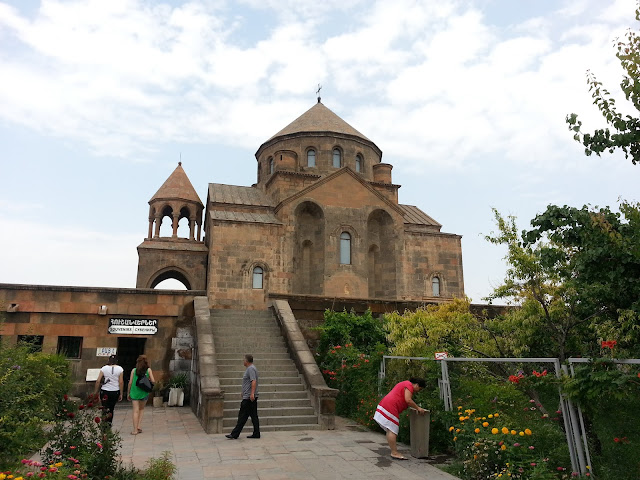 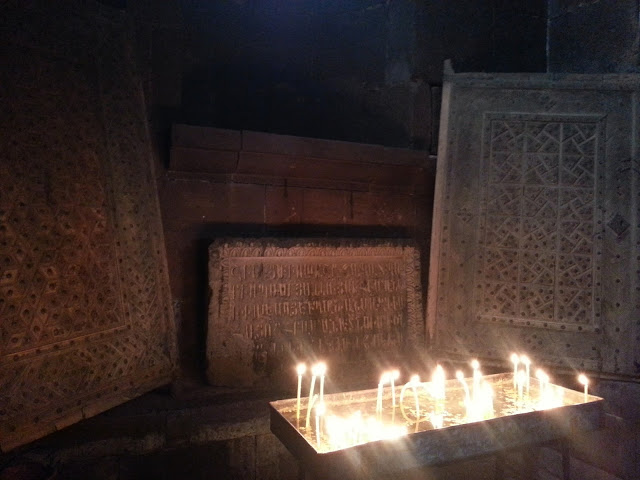 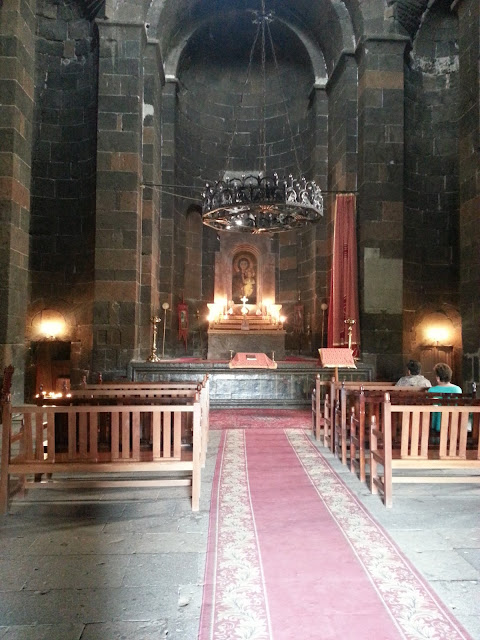 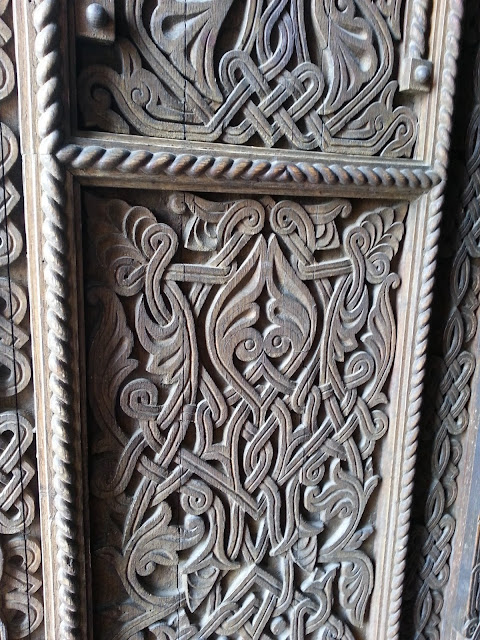 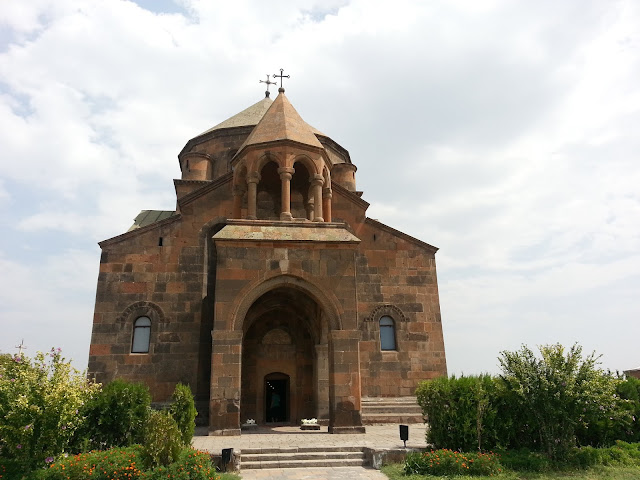 This is my last post about our trip to the Caucasus. It was very interesting and I would like to visit again, to see more of Georgia outside of Tbilisi (and in it), and more of Armenia as well.

A few days ago I read an article about "son preference" in the Caucasus, a euphemism for heightened sex-selective female abortion. I had heard of this problem in India and China, but it has apparently taken even stronger root in all three Caucasus countries of Georgia, Armenia, and Azerbaijan despite their strong religious backgrounds in Christianity and Islam. It was very depressing for me to read. I don't understand it. Aside from the missing girls who could have been born to become women and rear families of their own to bolster these countries' population, it brings the additional curse on the surviving children of a gender imbalance that will cause trouble in marriages and has historically caused more wars.

Every place and every time has its burdens.