Today Phin and I went to two places out of town but relatively near to Yerevan: the Garni pagan temple and the Geghard monastery. We took a city bus (#5) from Mashtots / Pushkin intersection to Masiv Market (by a big Mercedes service place) for 100 dram each, then a marshrutka (#284) from there to Garni for 250 dram each. It was our first successful marshrutka ride here! Often the locals and especially the taxi drivers try to dissuade tourists from using them, thinking apparently that they're not the right thing for us, but that's exactly what we wanted.

The pagan temple at Garni dates to the 1st Century AD and was reconstructed between 1969 and 1975. There's graffiti carved into it in Arabic and Armenian from long ago. The temple's deity is not known with certainty, but is thought to be Mithra. The temple throne is empty now. 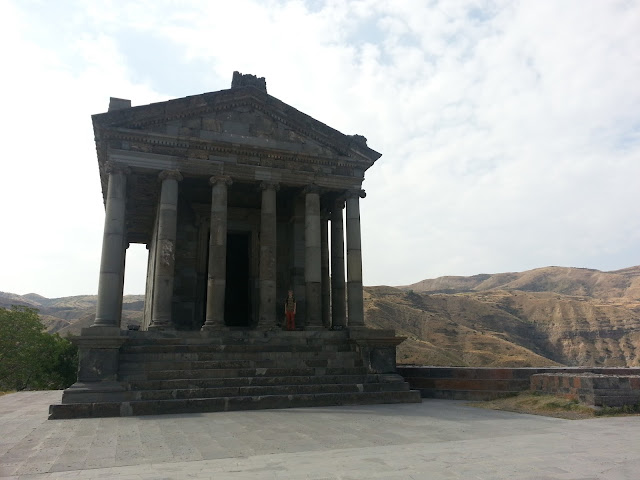 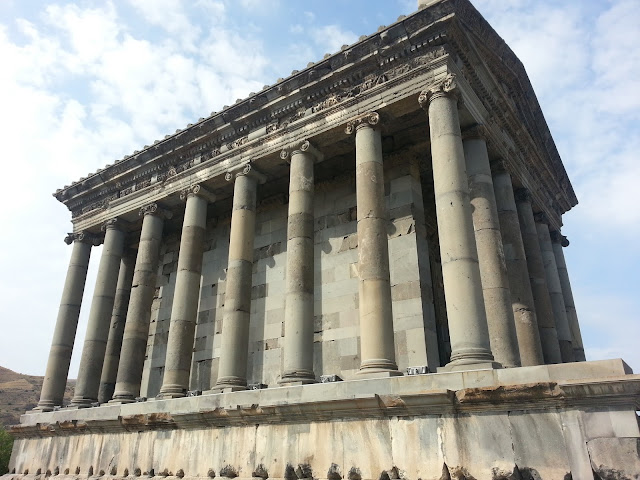 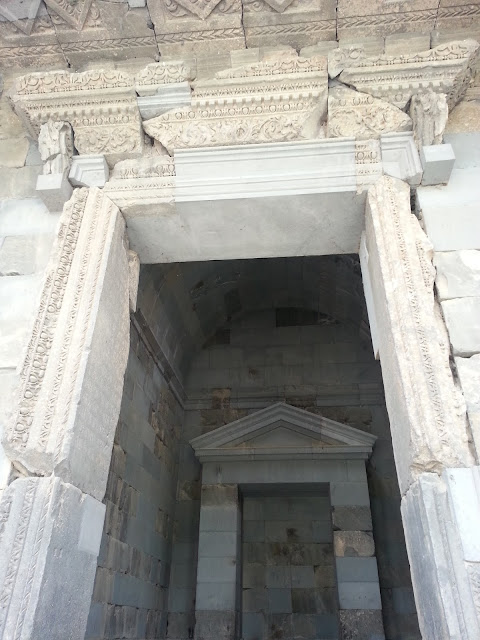 Nearby are the ruins of a bathhouse, with some fairly well preserved floor tile fragments in a new building that was closed. These pictures are through the glass doors. 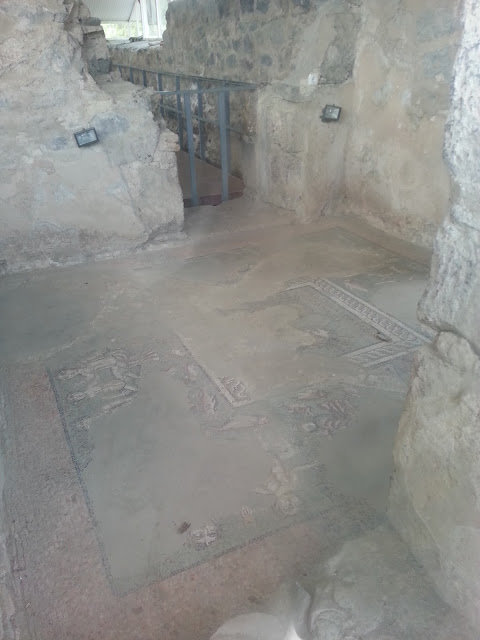 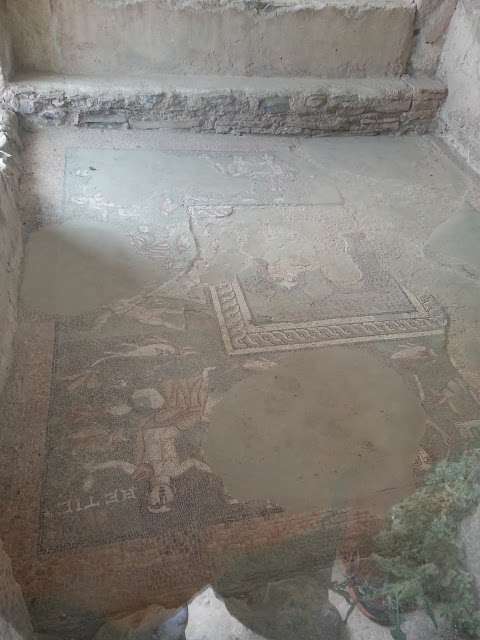 The views out over the valley are beautiful, and since it rained last night the air smelled very nice, bringing back memories after rain in Pocatello, Idaho. In fact the whole area reminds me a lot of northern Utah and southeast Idaho, in natural features, plants, hilliness, and Yerevan the city reminds me a lot of Salt Lake City (though bigger, older, and ex-Soviet, of course).

We next went for a walk down the hill in front of the temple and saw some abandoned small houses, with some of the nicest abandoned-house graffiti I've seen: 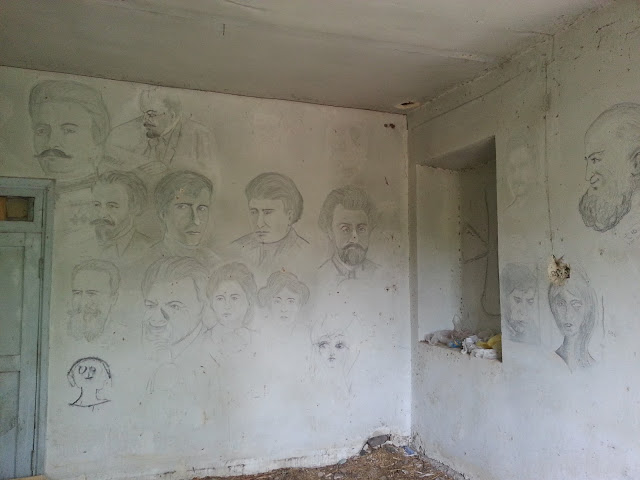 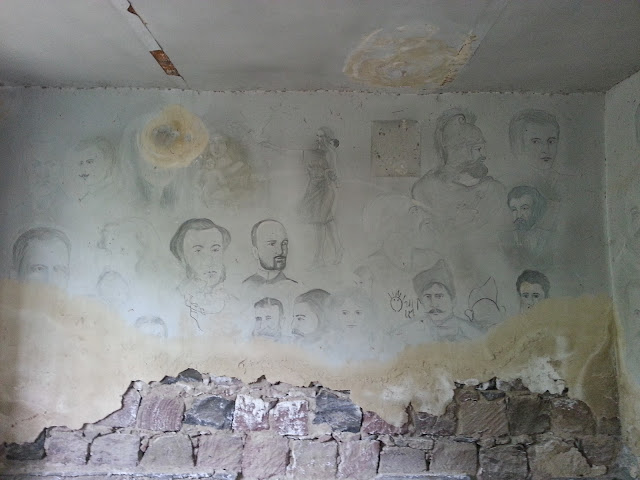 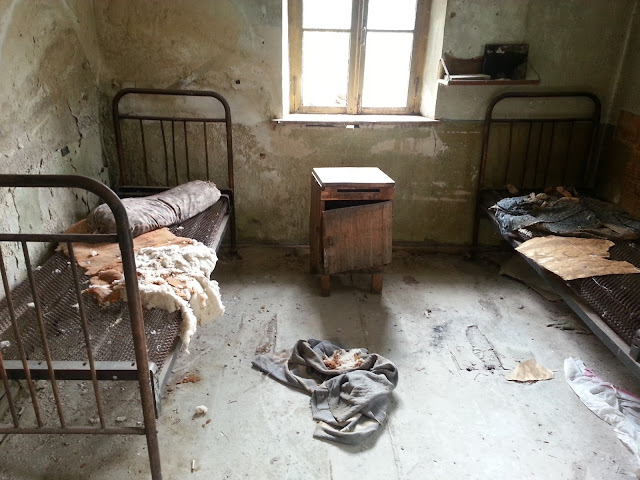 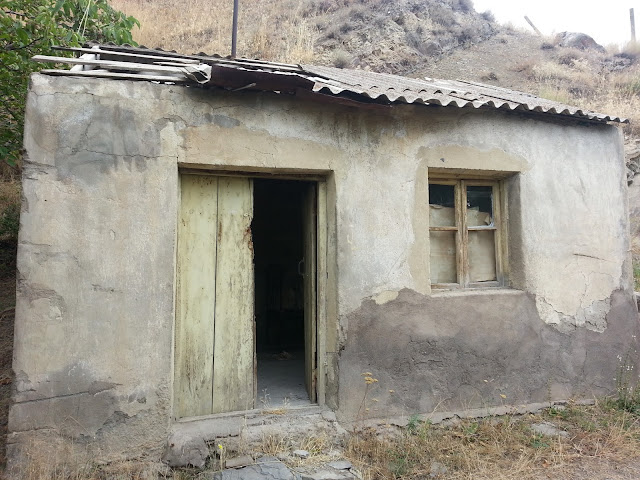 There are interesting basalt rock formations on both sides of the valley, a river below, and lots of tasty fresh water being piped out of the mountain to drinking fountains and homes. We were greeted by several residents of houses scattered along the road, where they grow grapes, tend chickens, etc. 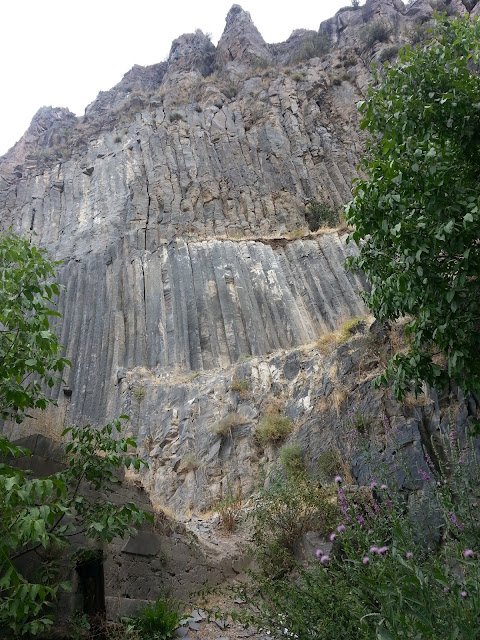 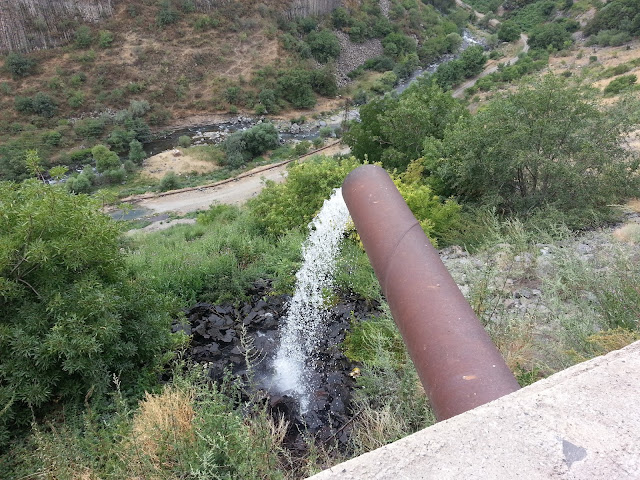 We saw a cave high up with only vague trails heading there, and naturally started hiking up. The brush got worse and worse, and soon there was no more trail and we were forcing our way through huge patches of stinging nettle, through big spider webs with various types of largish spiders (not Amazon large, but larger than I usually see). We did a little traversing of some rock walls to sidestep some, slipped on underbrush with water flowing beneath it, and finally we were in so much stinging nettle that it was stinging my legs all over through my pants, and my arms through my long-sleeve shirt. At that point it only made sense to continue on and see what was up there. It wasn't all that much and I wouldn't recommend it, but hey, sometimes we have to be stubborn to finish something and see where it leads, right? And my arms and legs still tingle hours later, so I have that to remember the experience by! 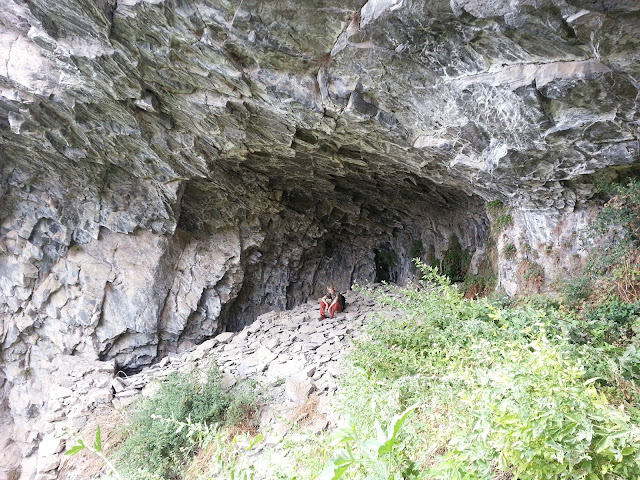 Next we made a friend, Micheline from Belgium, who is a high school geography teacher and is spending a couple of weeks in Armenia. She is divorced and has two adult daughters, so she travels solo a lot. We shared a taxi to travel together to our next destination, the Geghard monastery built partly in the side of the mountain in a valley corner. It was a really neat place, with a functioning church: 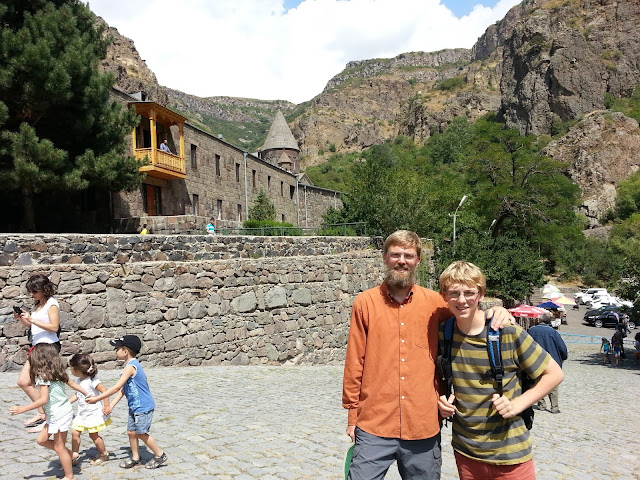 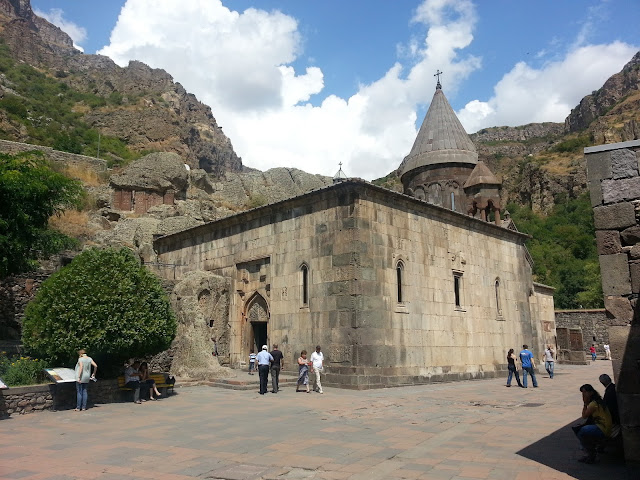 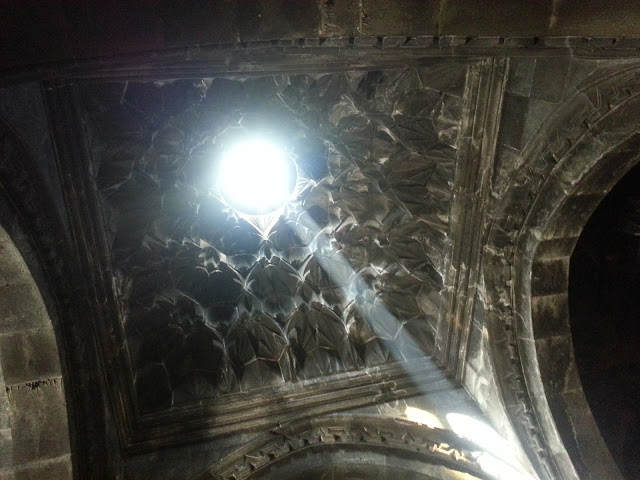 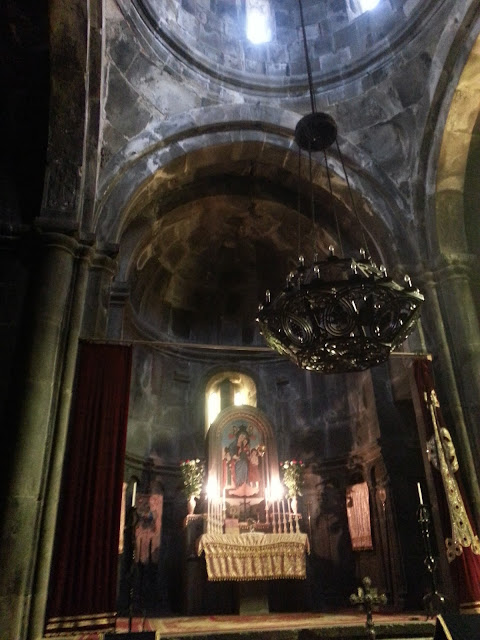 There were also very curious and interesting carvings right into the rock walls: 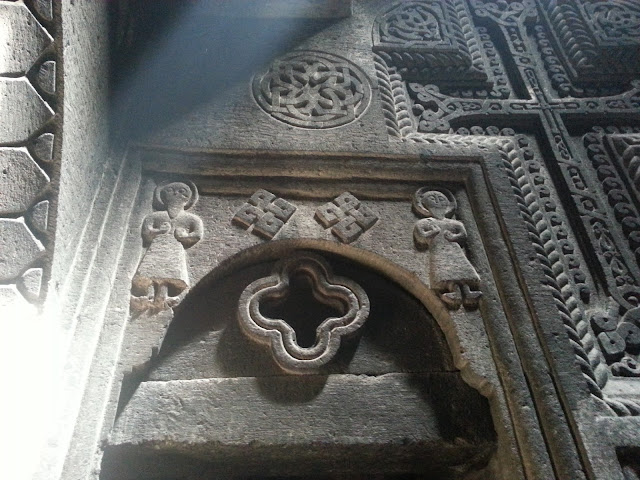 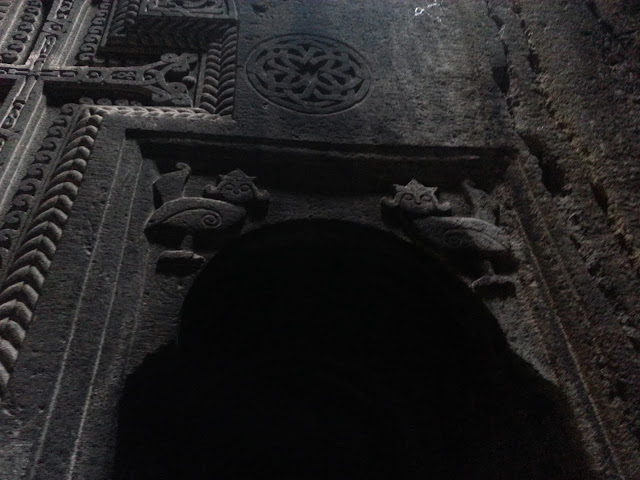 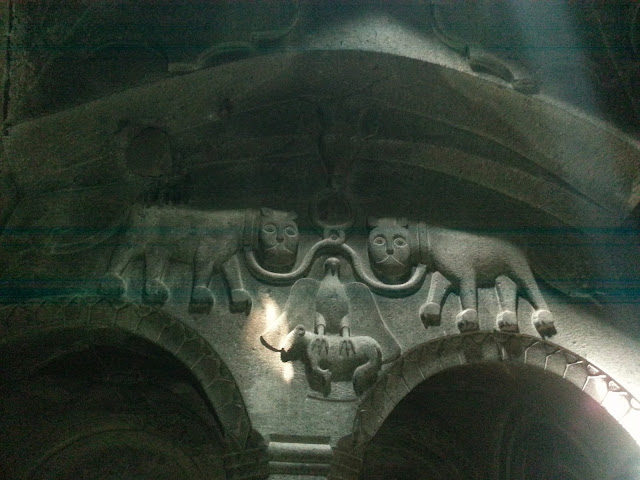 And a spring flowing out of the floor of the church via a gutter: 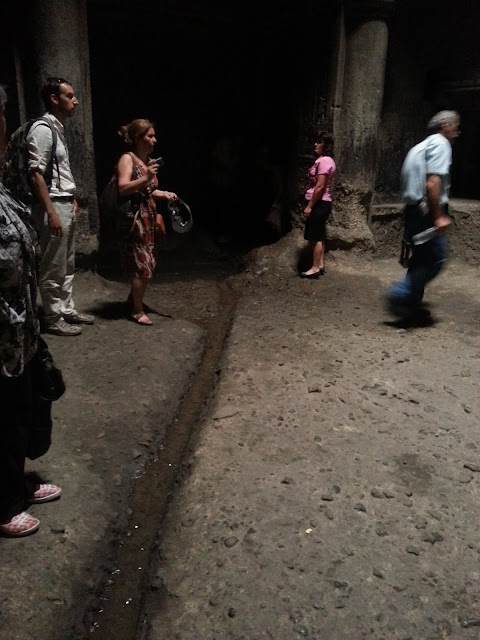 More wall carvings outside. I of course approve of the tender chickies or whatever kind of bird here: 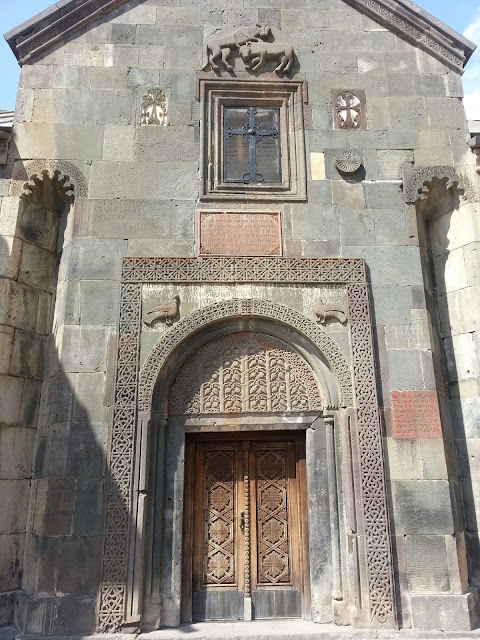 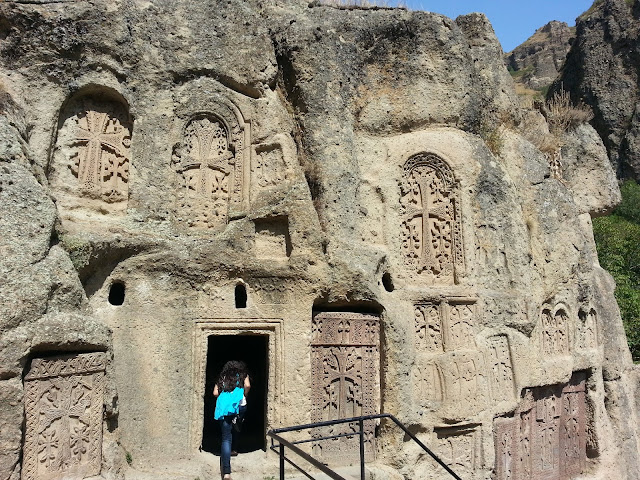 And some stairs carved into the rock: 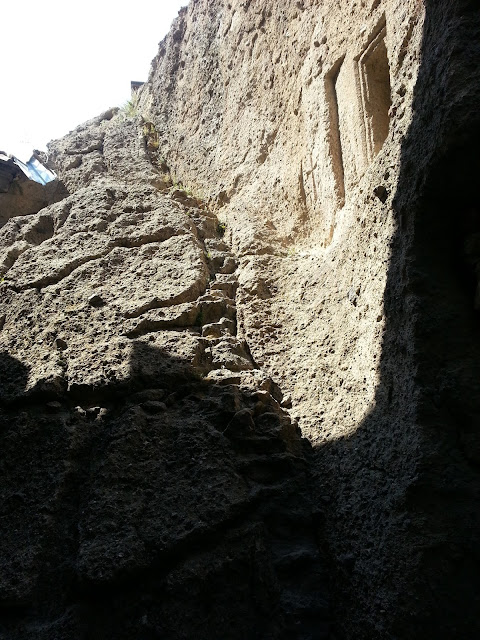 These were two really beautiful places to go, and it was nice to spend most of the day outside of Yerevan in the countryside. We rode back to town together with Micheline and will meet up with her tonight again.