We had a fun and interesting time in Kiev, and there's always more to the story than just the beautiful sights. Here's a little about some of those other moments we had.

The "mini-hotel" we booked to stay at turned out not to be a hotel at all, but an apartment carved into 4 separate rooms. We didn't know this, so we didn't have any contact information for the landlord, or any scheduled meeting to get access. We just wandered around looking for a hotel that didn't exist. Nobody knew anything about it. I called the Moscow-based booking company that we used (at a joyous per minute cost of 30,52 CZK = about $1.59 on my Czech SIM card!) and they had a helpful English-speaking dispatcher who connected me through to the landlady, who said she would come meet us. But she didn't know exactly where we were, or what we looked like!

We wandered around, met two really nice young couples (two of them Ukrainian, two Russian) who were out on the town and had been on a Christian mission in Norway and learned English pretty well for that, so they helped us try to find things, but to no avail. We wondered if it might be a scam, but they didn't have any money from us so it was hard to imagine how. We wandered all around for a couple of blocks looking for the place but had no luck. So I called the Moscow dispatcher again and after waiting a few expensive minutes on hold, just as I started talking to him, our landlady discovered us (looking clueless and lost, I guess) and finally we were able to get set. In a different apartment because she insisted the original one we booked was too small, just a single bedroom I guess with shared kitchen etc.

So we got into our new apartment which was on the 2nd above-ground floor in a building overlooking Independence Square, a very nice location. But at first she gave us the wrong door key, then she found no Internet set up, so she went to another of her apartments and took a cable modem from one, and while she was gone we noticed that the shower had a freestanding hot water heater inside the shower with the cord duct-taped to the glass, and the bathroom door had no window! The shower also had a complicated and seemingly broken sprayer system that liked to spray me in the face. On the second day, the water heater drew too much current and melted the cord and threw the circuit breaker, so we unplugged the water heater and had lukewarm showers after that, which was at least carried no risk of electrocution! 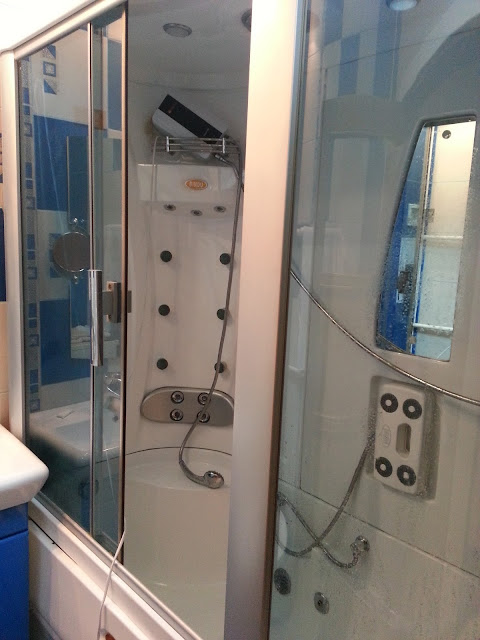 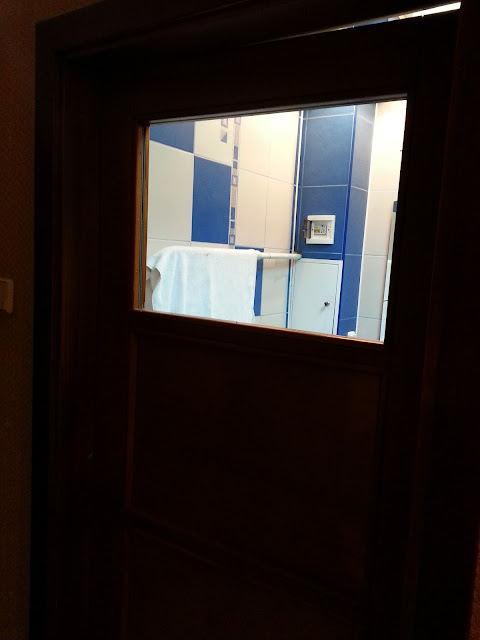 It was getting late and I wasn't very excited about looking for another place to stay, so we dedided to just roll with it. She didn't expect payment right away, so I figured if it was terrible we could at least bail out the next day. Anyway, we were looking for an adventure and I guess this was one way to find it! In the end the apartment worked out ok, and it was nice to have a refrigerator so we could have food in the apartment and not have to eat out always, and the clothes washing machine and line drying for the end of our Kiev stay before we went on to Georgia.

Now, some other odds and ends. The Ukrainian ministry for foreign affairs is a neat building: 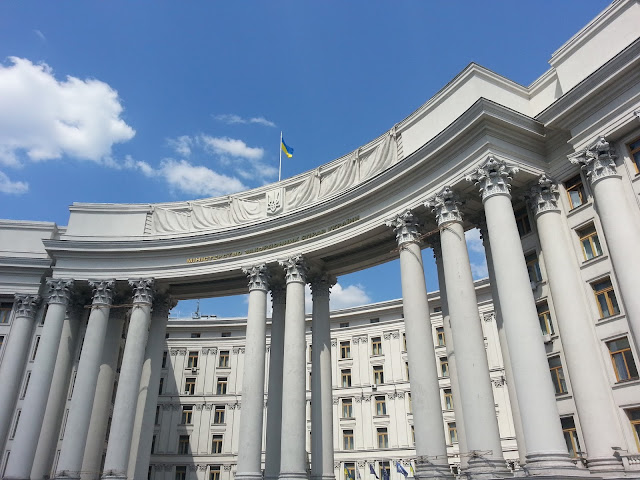 The YAPC::EU conference kickoff dinner was held at a Soviet-themed nostalgia restaurant that had some fun old items on display: 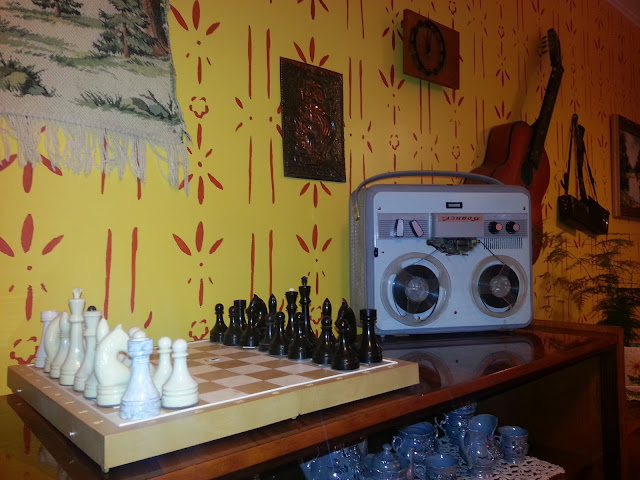 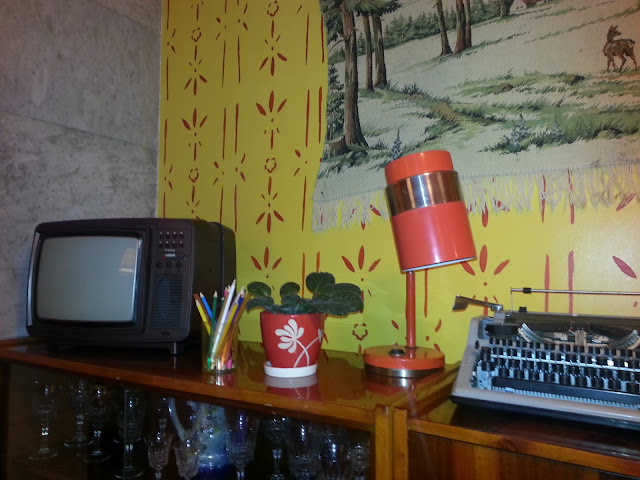 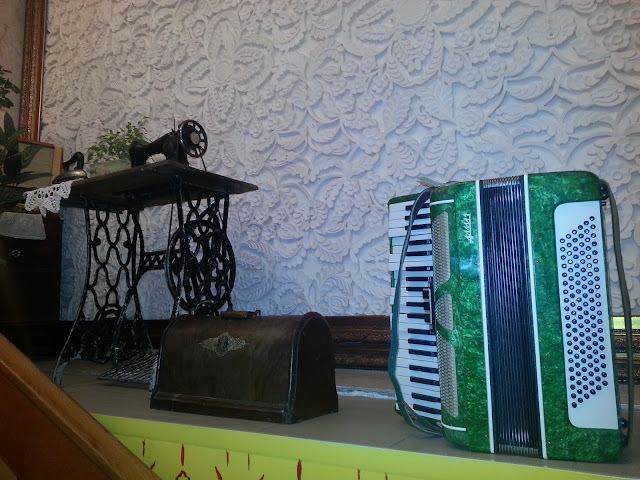 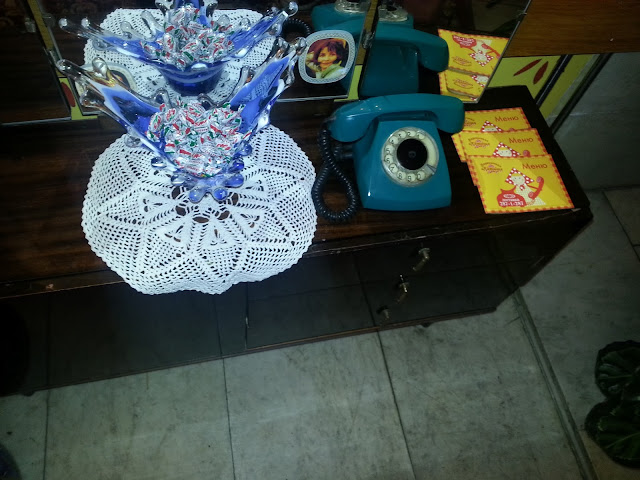 Here's a shot of Phin at the Ukraine house conference venue during lunch time: 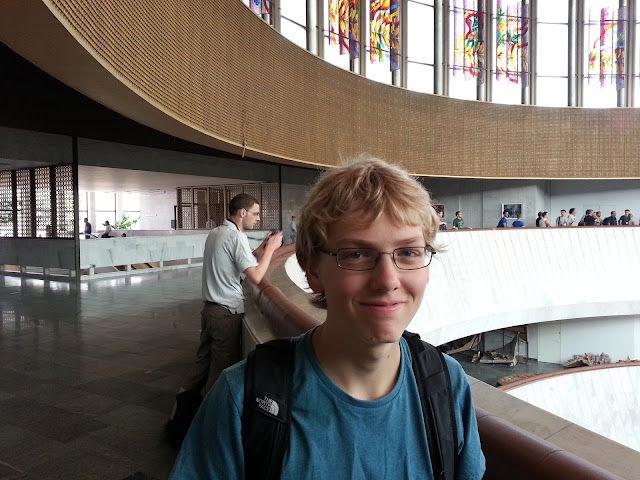 And these were the tables and chairs where we ate lunch. I think they look like they belong in the Mormon temple cafeteria in Provo, Utah. :) 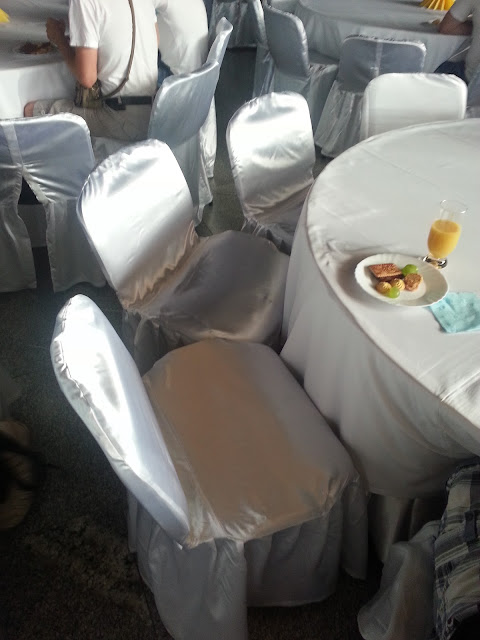 The second night of the conference was a river cruise that was a fun way to see more of the city and socialize with more people. Here are our friends Stefan Hornburg (Germany) and Šime Kodžoman (Slovenia): 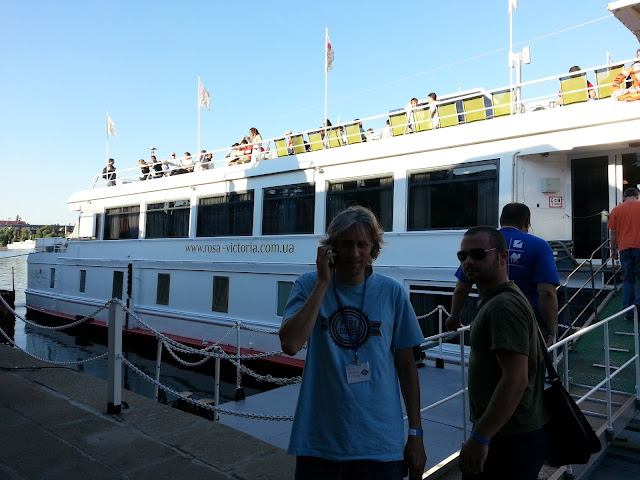 And Phin's birthday celebration, which happened to coincide with the catering on the boat: 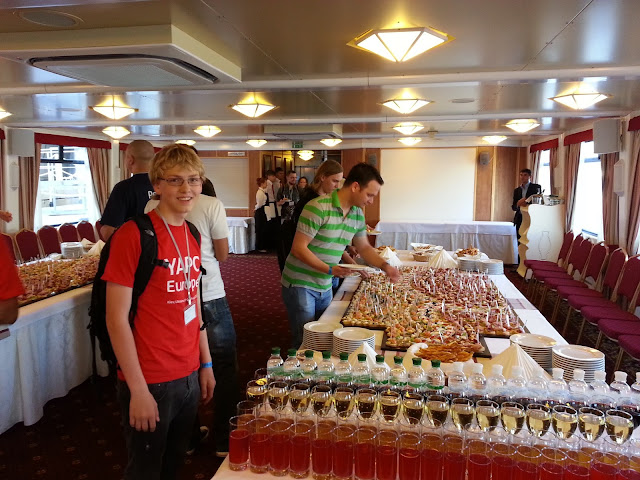 And here are Phin and Jure Kodžoman (Slovenia): 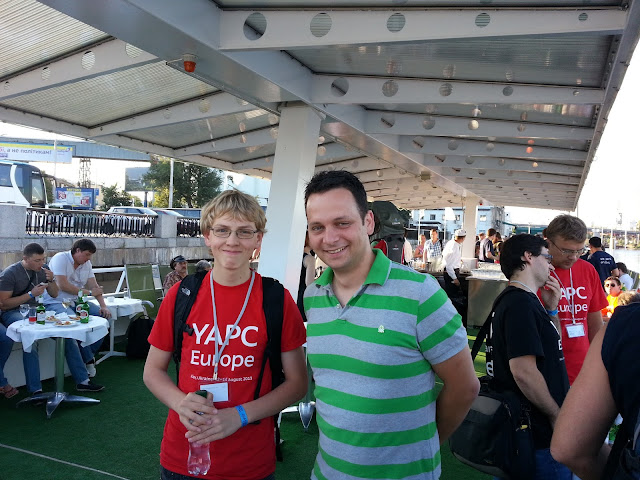 We got to watch the sun go down from the boat: 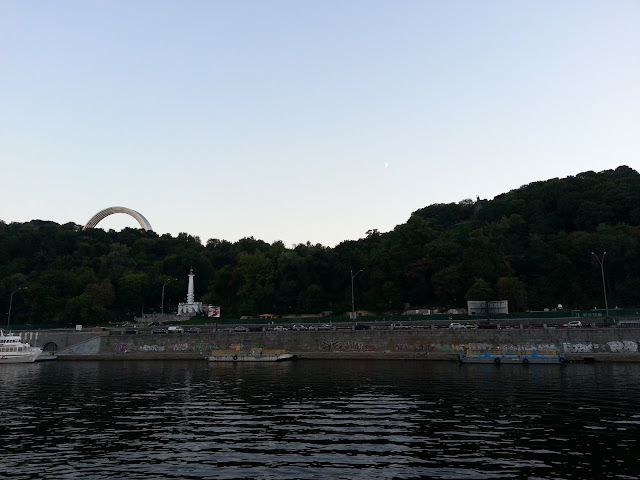 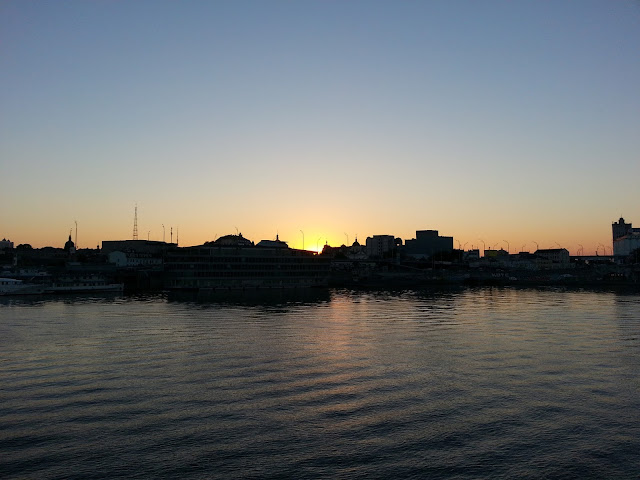 Though I think it would've been nicer to start the cruise earlier and see more of the city in evening light.

Here's Phin at a great view out over Kiev: 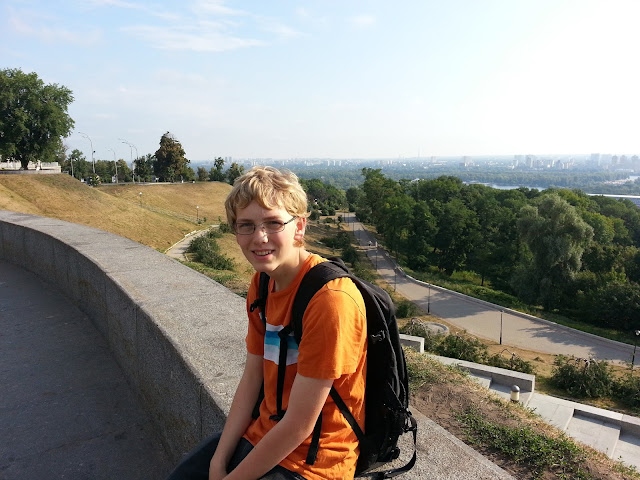 A metric mystery: Why did some of the bottled water labels declare the volume as 0,5 дм³ (half of a cubic decimeter)? Yes, that's the same thing as half a liter, but why use the cumbersome description? Subtle school augmentation for the kids? And I was surprised to see this milk measured as 900г (grams), by mass instead of volume. It seemed like about 1 liter, as is common for milk in Europe: 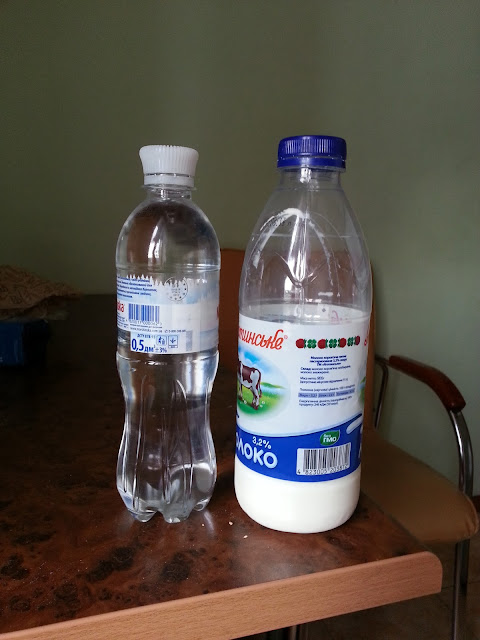 But not all water or milk were measured this way! Just some.

I also noticed that the license plates in Ukraine were cleverly done: They used only the subset of letters of the alphabet that are common between Cyrillic and Latin. That way they would be readable anywhere in Europe or the eastern Cyrillic-using countries, even though the letters would be pronounced differently in each alphabet. I think the Russian plates do the same thing, though I didn't see as many of those so my small sample size may be misleading.

Finally, on our last day we came across this advertisement about Philipp Kirkorov, which I found retrofuturistically terrifying. Kind of like Chevalier from the movie Gentlemen Broncos: 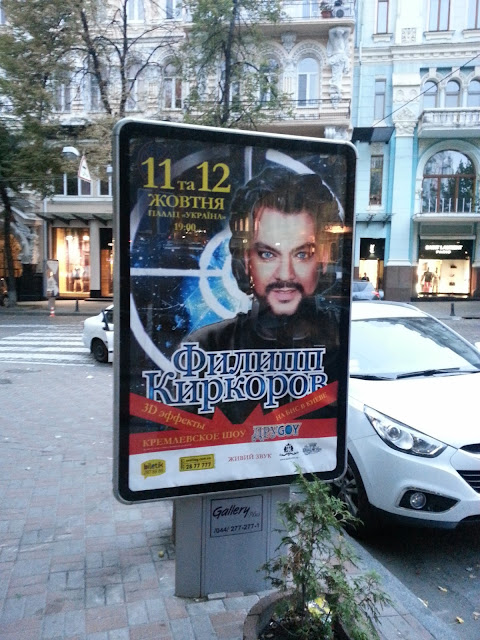