We probably go to the store four or five times a week here, partly because that's how I want it -- fresh bread every day! -- and partly because we're always on foot and there's only so much a person can carry. Anyway, I thought I'd write a post about what shopping here in Prague is like.

There is a small grocery store called Billa that's just under half a mile from us, and we go there sometimes for bread, rolls, or any other thing we need pretty quickly. It takes less than ten minutes to walk there and has a good selection but is a little more expensive than other stores. The other place we go a lot is Kaufland, which is big. It's a little more than a mile from us and lately I've been walking all the way there -- it's a pleasant walk along residential streets and through a park -- and then I take the tram back when I'm carrying all the stuff. It's two or three stops on the tram, depending on whether I want to take the longer, less strenuous way or the shorter but steep way to our house. I wear my backpack, which is pretty large, and bring a cute reusable shopping bag that stuffs into a little sack. (My sister Cadence gave the bag to Jon a while back and I think of her every time I use it!) I also bought a large, sturdy, folding Kaufland bag made out of a kind of woven plastic, but I've discovered that I'm just a tiny bit too short to carry it comfortably without scraping it on the ground, so I don't always bring it. Anyway, I put the heaviest stuff in the backpack and the delicate stuff like eggs and bananas in the shopping bag, where I can coddle them. (It's a constant struggle to get the bananas home without bruising them. I'll do it someday!) If I bring a big kid or two with me, I make them wear backpacks, too, and we can get quite a lot more stuff.

You have to bring your own shopping bags, which is typical of Europe, as far as I know. You can buy bags at the checkout, but you get used to carrying a few bags around wherever you go. Shopping carts are chained together with clever locks that unlock when you insert a coin and spit the coin out when you return the cart and lock it up. This means the carts are always right where you need them and the store doesn't have to send employees out to the parking lot to retrieve them. (When Jon and I were on our missions in East Germany 20 years ago, people would freak out at you if you tried to go into a grocery store without a cart, but nobody seems to care here. Next month when we head to Dresden, we'll see if it's a geographical thing or just the passage of time.)

Kaufland has two levels and nifty escalators that are ramps, so you can take the carts up them. The wheels on the carts are metal and ridged so that they lock into the escalator surface somehow and don't move. (Suddenly I want to go on the escalator thing with bare feet! What does it feel like?) These ramp escalators are pretty common -- I've seen them in other grocery stores, especially the huge grocery stores that are often anchor stores in malls here.

In most stores I've been in, you weigh your own vegetables and fruits on a scale that has a touchscreen monitor. You find the picture of the produce you're weighing (I'm glad there are pictures, although I'm getting better at Czech food vocabulary), touch the picture, and a sticker with all the relevant information comes out. Prices are per kilogram, and as far as I can tell, most things seem cheaper in the produce section than at home.

Every store has an amazing variety of freshly baked bread and rolls. They're held, unwrapped, in shallow bins and/or shelves, and usually at least a couple of varieties are still warm from the oven. I always get excited to buy warm bread, even though by the time I get it home, it's usually not that warm anymore. Still pretty fresh, though! You can find sliced sandwich bread, but there's not much of it, and I'm not interested, anyway. I love crusty European bread and rolls.

It's not easy to buy things in bulk here, which is hard for me to get used to. For example, the rolled oats we buy come in packages of about six cups. At home, I bought rolled oats in 25-pound bags. Same with flour and sugar -- they come in small bags, maybe three pounds or so. Maybe there is a place somewhere that sells things in bulk, but I suspect that their "bulk" might just be a flat or case of small bags, since there is that sort of thing at Kaufland.

Some things that are hard to find: peanut butter, brown sugar, baking powder (they seem to use baking soda more regularly here), chocolate chips, unsweetened cocoa powder. You can find all of this stuff at Marks & Spencer, which is a British department store that has a great international food section, but it's quite expensive. And I have not seen any natural peanut butter like Adams, which is our favorite peanut butter. It's all typical peanut butter with added sugar and hydrogenated oils. I don't care about having peanut butter -- part of this trip for me is getting to know the local food and experiencing it -- but the kids love to eat bananas and apples with it, so I looked out of curiosity. But since it's expensive and not what we'd buy normally, the kids can go without. I bought roasted, salted peanuts, and the kids seemed to like eating those with their bananas, so I think they'll live.

As an aside, every time I go into Marks & Spencer, I feel like I'm going to run into Bridget Jones, in spite of the fact that everyone in the store is Czech and not British.

Lastly, here's a picture of the kids on Charles Bridge yesterday. 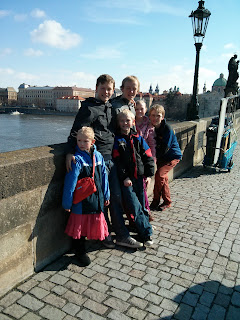