Here's the view from our window this morning: 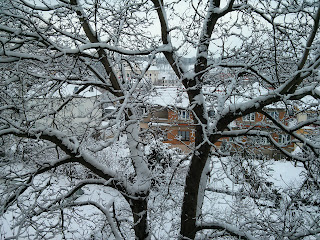 I feel like we brought the Teton Valley winter with us, and like we should be apologizing to everyone here. (I'm so good at guilt!) But I'm pretty sure that Spring is on its way, and I hope the snow will melt soon. Although it's lovely, I want to see some green things.

In other news, Jon and I went to an organ and trumpet concert last week in the St. Nicholas church on Old Town Square. It's a Hussite church (though it's been owned by different churches over its 800 year history) and is not very large, but of course, it's beautiful and ornate and huge compared to what I'm used to. It was a lovely one-hour program, with several pieces for two trumpets and organ (trumpets performed by brothers), as well as several organ solos, including a great improvisation by the organist. It was very cold in the church, in spite of several space heaters near the audience. Even the organist and trumpeters wore their coats throughout the performance, although I hope it was a little warmer up in the organ loft, where they played. Or that they had some space heaters up there. I can't imagine playing the organ in that kind of cold.

I talked to the organist after the concert, but since he didn't speak English and my Czech is really, really limited (really limited!), it was a pretty short exchange. I think I told him that he played the organ well. And I think Jon told him that I play the organ. He said "Thanks" many times and seemed appreciative. I really liked his improvisation and I wish I had said something about that -- I could have pointed at it on the program and said "good" at least. But it's hard to think of what to say when trying to communicate in Czech. You'd think it wouldn't be that hard, since I don't know that many words, but it turns out that most everything flees my mind when I'm also trying to understand Czech.

I find it a bit difficult to pay for concerts when it's so easy to hear world-class organ music for free in Utah. I've been to mass twice just to hear the organ, but it's a lot of talking that I don't understand, just to hear a few minutes of the organ. Also, when I went to mass at St. Vitus, it turned out to be in a small chapel off to the side, so we didn't hear the big organ. Maybe they have it in there during the winter, because the cathedral is freezing and too hard to heat, or maybe it was a different kind of mass -- my knowledge of Catholic worship services is nearly non-existent. I enjoyed that small mass, though, and I'm pretty sure the organist was playing a pump organ! It was wheezy and the pumping squeaked, but it was delightful.

While we're on the topic of organs, I got to play the organ at church last week for sacrament meeting! I wasn't expecting the chapel here to have an organ at all, and maybe not even a piano, but it has both. Anyway, last week, about three minutes before sacrament meeting started, I said to Jon, "I want to play that organ." And 2 1/2 minutes later, the branch president asked me to play because their organist didn't show up. I had no time at all to test things, so hopefully it sounded okay. It was fun to play for a congregation again -- I've missed playing the organ every week at church. I didn't have my organ shoes with me, but that turned out to be fine because the organ's pedalboard is straight instead of radiating and is easier to play with toes only. (This is how all pedalboards were in Bach's time, apparently.) Also, whenever I tried to use a heel, I'd nearly slide off the bench.