Today we took the train about 20 minutes north of downtown Liverpool to Crosby Beach. When we arrived, the tide was out and there was lots of sand and sky to see. 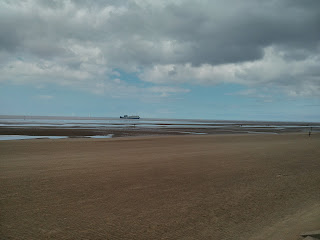 If you look very closely at the above picture (click on it to see a bigger version), you might notice a few of the 100 cast-iron men standing randomly on the beach and in the water over a 2-mile stretch of the beach. They are part of an art installation called Another Place and it is pretty cool to see them standing all over the beach, facing out to sea, as far as you can see. A few are buried to the knees or thighs in sand, some are standing way out in the water and disappear slowly as the tide comes in. They are all exactly the same, cast from the artist's own body. 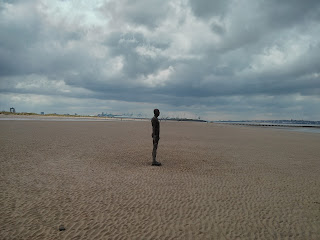 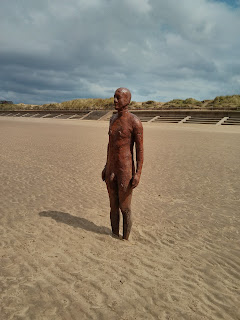 It's pretty cool and I'm glad we got to see it for several hours today.

When we left our house, it was warm and even a little bit sunny. It didn't last, although the sky was still partly blue when we arrived. But despite the beach wind and cold, the younger kids took off their shoes and played in the sand. (Do you like Mira's bright yellow rain jacket? Lillian has a pink one and Seth has a green one. They were really inexpensive and the bright colors make the kids easy to spot!) 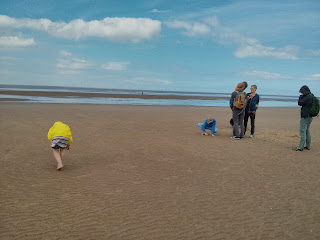 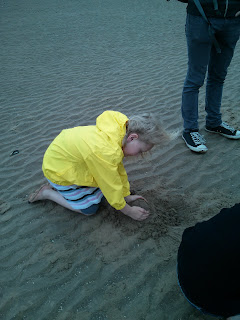 We talked to a couple of lifeguards for a bit -- you're not supposed to swim there at all, but they apparently patrol just to help people get out of the mud, which is very deep in some places. They were both pretty sandy and muddy because they'd just helped an old man and his dog who got stuck when the tide came in faster than he'd expected. It did come in fast in some flat parts of the beach, and we watched it for a while. Every wave brought in hundreds of jelly fish that the kids were fascinated and repulsed by. I guess I forgot to take pictures of that.

Then we walked to a really cool park just past the beach. Below is Zed doing a handstand. Everybody has been using our yard to try to learn to do handstands. Zed is the best, followed by Seth (and someone will probably get mad at me for saying that). Then a couple more pictures so you can see Lillian and Seth in all of their colorfulness. 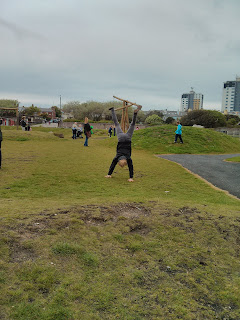 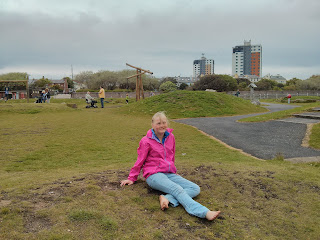 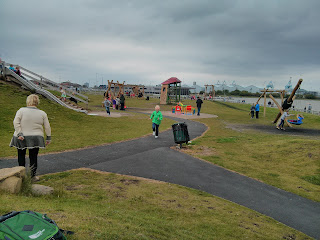