A few notes about the language

Even though we are all speaking English, there are many times when we have trouble understanding people here in England. I knew this would happen, but it's still amazing and fun. The UK has many, many different accents and dialects (Wikipedia has a long comparison of American and British English, if you're interested), and some are harder to understand than others. Liverpool's accent, called Scouse (Liverpudlians are known as Scousers), is one that's known to be hard to understand -- they talk fast and squish words together and leave words out and have slang terms unique to Liverpool, and when I've overheard Liverpudlians speaking to each other, it sounds like a completely foreign language.

When we arrived at church on our first Sunday in Liverpool, I was surprised when people started asking me if I was okay. "Are you okay?" they said. And "Are you all right?" I thought I must look pretty tired or something, but it quickly became apparent that they were just greeting me. Actually, it's more like "Y'alright?" or "Y'okay?" People say it everywhere as a greeting. I guess it's like Americans saying "How are you?" as a greeting. I'm finally getting used to it and don't have to force myself not to say, "Why? Do I look like I'm not okay?"

Another greeting is "Hiya" and we wonder if it's a very contracted version of "How are you?" People often say "bye" here, too, more often than we do in America, I think. They draw it out and say it with a sing-songy couple of syllables.

I love all the accents we're hearing. I even love the way people say "um" here. Instead of a short u sound like we Americans do, they say something more like "ehm" or "ihm." Or sometimes it sounds like the German ü. And today at church, it was more of a "ouwam." At any rate, it sounds way better than our American version, at least to my ears. But the other day, our landlord Rachel said to me and Mira, "Oh, I just love your accent!" I guess it goes both ways!

Then there are all the words that we use differently. Before we got here, I learned that instead of searching for "vacation rentals," I had to look for "holiday lets." The train station is a railway station. When there's a bus stop that is for getting off the bus only, it says "for alighting only." Here are a few more, some of which I knew before we came here, but it's a whole different thing to hear them in person:

Wikipedia has a list of British words not widely used in the U.S., as well as a list of words that have different meanings in British and American English. (There's a part 1 and part 2.)

There are also confusing pronunciations. For example, there's an area of Liverpool called West Derby, and the locals call it West DARBY. Then there are the words like Leicester and Gloucester, which are pronounced "Lester" and "Glosster." And I recently found out that Keighley is pronounced "Keithley." How about that?

One more thing the kids and I have noticed: Jon takes on a British-influenced accent when he speaks to people here! He kind of drops his Rs a bit. It's not an English accent, but it's not Jon's normal speech, either. I think this stems from our experience years ago with my extended family in the South. While visiting my great-aunts and uncles in Yanceyville, North Carolina, Jon was a little frustrated when my great-uncle could not seem to understand him. But Jon found that when he started talking with a southern drawl, Uncle John understood him just fine! I think he's applying the same principle here.

There's so much more, and, in fact, there are books written about this kind of thing. So I will stop for now and leave you with this photo of a box of granola at the store. I found it funny. 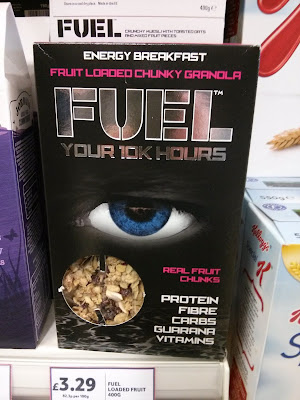