York Minster and other news

The kids and I visited York Minster this week. The present building was built between 1230 and 1472. It is the Anglican (Church of England) cathedral in York and is the seat of the Archbishop of York. I've heard that it's the largest Gothic cathedral in Northern Europe but read that it's the second largest. I've also heard differing things about why it's called a minster. At any rate, it's beautiful and has a lot of very old, fantastic stained glass. Zed, Phin, and Seth paid the extra £5 each to climb the 276 narrow and steep winding stairs up to the tower, where they had a great view of the city.

The rose window from the outside: 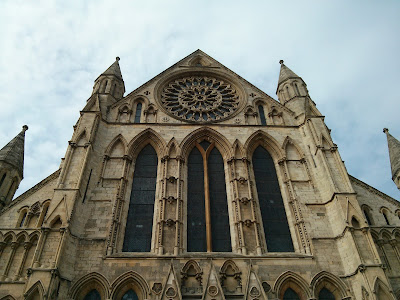 Looking towards the front from the south side: 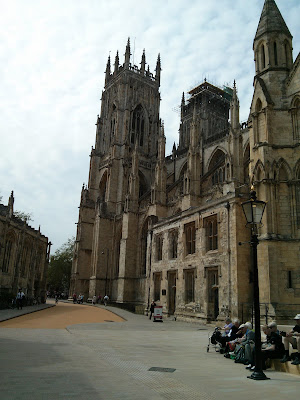 Here's a short, interesting video about York Minster (although I think it overuses the fish-eye lens a bit):

I went to Evensong at the minster twice last week, the first time with all the kids and the second time by myself. It's a beautiful worship service, almost all of it sung by a combined boys' and men's choir, sometimes accompanied by the big organ, sometimes by a very small portable self-contained organ with just a few flute stops, and sometimes without accompaniment.

Here's the organ, which is situated between the Quire (where Evensong is held) and the nave, the main part of the church. 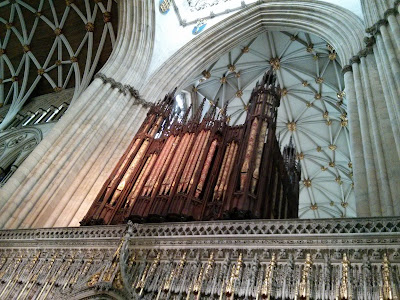 Here are Seth, Lillian, and Mira in York: 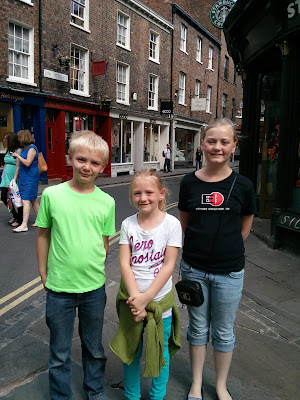 I'll write more about York later, but for now, suffice it to say that there is an overwhelming amount of old stuff. Everywhere you look, there are ancient buildings leaning towards each other across the street, narrow, winding cobble-stone streets, old stone churches every block or two. The bus drivers in York are especially talented, because they drive those massive double-decker buses through the narrow streets, sometimes within inches of the old buildings on either side. It's fun to be up on the top of those buses.

Just one more piece of news: Zed and Lillian had their first organ lesson today at the All Saints Church here in Pocklington. Their teacher is the organist at the church and director of the Pocklington Singers, whose performance of Bach's Mass in B Minor we heard just a few days after our arrival. Zed has played the organ a few times in church before and has done really well, and now he's learning a couple of Bach preludes for organ. Lillian hasn't played the organ much and is excited to learn some basic technique. She also fits into my organ shoes, which helps her reach the pedals. The organ in the church is a 20+ year old electronic organ, with the speakers cleverly hidden behind a small pipe facade from the old pipe organ. Even though it's just an electronic organ, it sounds pretty great in that 800-year-old stone church.