Last week on Wednesday, we moved for the fifth time since we began our adventure. We've purchased a few new suitcases and gotten rid of some small bags, so our packing is looking better every time. I'm letting go of the packing-for-carry-on-only mentality that I used to adhere to for trips. It turns out that if you're packing for a year, it's better to have one big suitcase (one that rolls well) and one backpack for each person. Duh. But it took me a while to figure that out. There will probably be more revisions in the future.

Everybody's squinting in the photo below because it was so bright and sunny that day! Every sunny day in England feels like a miracle. 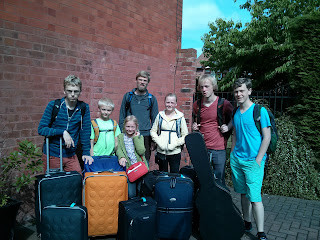 We took the train from Liverpool to York. Just outside the York railway station, where we waited for our bus to Pocklington, we were just across the street from the York city walls. 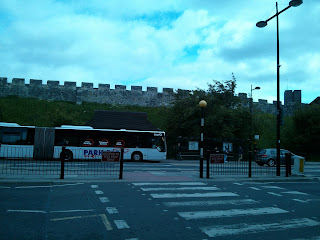 More on the walls later, but it's sure fun to walk out of a railway station and come face to face with 800-year-old walls!

The bus from York to Pocklington, our new home, took about 45 minutes, even though it's only about 14 miles, and was quite expensive. And now for a small aside about buses here in the UK: buses here seem to go nearly everywhere, but they can be expensive (I don't think they're subsidized), there are several different companies, and they can be quite confusing. Unlike in Germany and Prague, there's no clue inside the bus about where you are going -- no list of stops or map of the route. If you're lucky, the bus stop will have sheets up that tell you the names of stops on the route, or maybe just the main stops on the route. If you don't know where you're getting off, you just have to ask the driver or fellow passengers. Or use the GPS on your phone and stare at the little moving arrow and try to guess at what point you should push the "Stop" button so that the next stop is the one you want. If that stop button doesn't get pushed, by you or someone else, and there's nobody waiting at the stop, the bus just flies by. And you can't count stops to figure out where you want to go, because different stops are for different buses. It all seems very arbitrary and confusing to me. On the other hand, the bus drivers and passengers have thus far been quite friendly and have helped us figure things out when we've asked.

We do love the double-decker buses, though, and that's what travels between York and Pocklington. So while Jon and I stayed on the bottom and tried to keep all the luggage from toppling over, the kids went upstairs and had a delightful ride. The countryside is amazing, by the way! So green and lush and dotted with sheep, cows, and horses, with hedgerows or stone walls lining the roads and fields. (Phin said to me the other day, "Mom, I've seen cows." To which I said, "But these are English cows! And they're in lush, green fields instead of rocky, brown ones!")

Here's one of the first things we saw when we got off the bus: 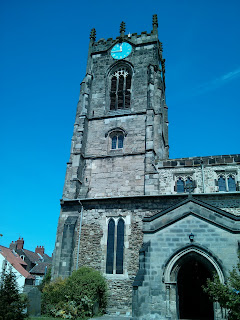 It's Pocklington's All Saints Church and it's about 200 feet from our house. On Saturday night, we went there to see the Pocklington Singers' performance (with full orchestra) of Bach's Mass in B Minor, which was delightful. There's nothing better than hearing beautiful music performed well in a big stone church. The choir director is also the organist at the church and it looks like Zed and I will be taking a few organ lessons from him while we are here. Yay!

We are living in a townhouse just off the main town square. The building used to be a pub and brewery and is at least 250 years old. The owners, Ken and Rachel, own a jewelry and engraving shop (with some second-hand things, too, I think) out of the courtyard behind the house, so we see them frequently, along with their friend and employee Peter. They have all been really wonderful -- they welcomed us with a bunch of food and other supplies to start with and they were patient and helpful when the internet connection proved to be problematic for Jon's work purposes. It's constantly amazing to me how many great people we are meeting! That probably says more about me and my expectations than anything else. Anyway, I will do another video tour soon and give more details about the house.

Pocklington (often called Pock by the locals and henceforth by me because it's so much quicker to type) is small (about 8500 people) but busy and active. We are close to everything -- grocery stores, a sports complex with a swimming pool and gym (the kids went swimming there today), an art center that shows movies when they aren't hosting live events, lots of restaurants, bakeries, butchers, salons, second-hand stores, and every other kind of shop. There are apparently a lot of bike and foot paths around, which we will have to explore. (We met a man at church who lives here in Pock and he offered to let us use a bike, which he brought over yesterday morning. So nice!) I think we'll enjoy it here, though it's pretty different from the city life we've been enjoying so far.

That's all for now, but I'll leave you with a picture of Mira on the train to Conwy. It features a natural curl in her hair that she was very excited about that day! 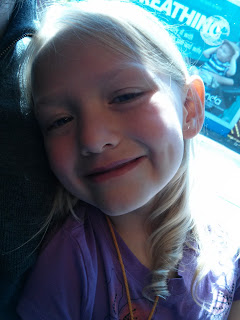