Sense and Sensibility is my favorite novel by Jane Austen, so I was excited to go to an outdoor theater production of it at Burnby Hall Gardens just down the road from us. I told the kids that I'd take anyone who read the book first. Nobody was very interested except for Lillian, who immediately started it. She was about a quarter of the way through it when we saw the play and she's busy finishing it now. It'll be her first time reading a Jane Austen novel. (Insert gleeful clapping here!) 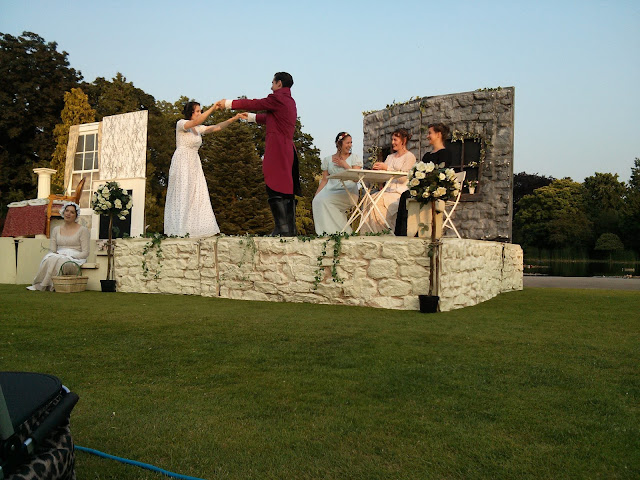 In this production, all of the actors played multiple parts except those who played Eleanor and Marianne. I love seeing actors take on multiple roles in a production. It's fun to see how they highlight the differences between the characters.

Since the play was performed outside, many people brought picnics with them, and some playgoers were very serious about their picnics! We saw several picnic hampers, with real (i.e., not plastic) plates and silverware buckled to the underside of the lid, and plenty of people were drinking out of wine glasses they'd apparently brought from home. During intermission we were delighted to see a group of older people serving themselves ice cream in china bowls. Their wicker picnic hamper must have been a cooler in disguise! And they brought ice cream in it! I'd never think to do that, but maybe I will now!

Since everyone in the audience except us had English accents, it kind of felt like they were part of the play, too. Afterwards, as we were leaving, Lillian and I thanked the actors, who were wonderful and gracious. I said, "It's my favorite Jane Austen!" and "Marianne" said enthusiastically, "Mine, too!" Some of the best plays I've seen have been these traveling troupes and I'm so glad they do it!

Don't feel obligated to watch the video. I just thought I'd put it up for my own future amusement. And for the record, I'm always disappointed with how photos and video represent the real thing. Y'all just have to visit, I guess.

The guy in the hat is Sir John Middleton, and he also played Edward Ferrars.