Since taking a semester-long class on the Brontës at BYU many, many years ago, I have been interested in visiting Haworth, home of the Brontës. Patrick Brontë, father of the three famous author sisters, was clergyman at the local Anglican church, and the Brontë children grew up and lived most of their adult lives there.

The Brontës are a fascinating family -- all four of the children who lived to adulthood had poems and/or novels published. Charlotte is probably the most well-known of the sisters due to her novel Jane Eyre, but Emily is also pretty famous for Wuthering Heights. Branwell, the only son, had some poems published. Anne, the youngest, wrote what my BYU professor considered the first feminist novel, The Tenant of Wildfell Hall. Charlotte and Anne both wrote other novels and all of the sisters also wrote poetry.

As children, the siblings created two imaginary worlds inspired and peopled by a set of toy soldiers given to Branwell by his father. The worlds had detailed and complex characters, histories, politics, armies, as well as maps done by the children in watercolors. They also made tiny magazines and newspapers for their imaginary worlds, with lengthy articles written in very small handwriting that benefits from the use of a microscope. Some of these tiny books, about 1 1/2" square, are on display in the Brontë Parsonage Museum, and it was really cool to see them. Photography wasn't allowed in the museum, so I have no photos from inside.

The family story is tragic, though probably not uncommon for the time. There were originally six Brontë siblings. Their mother died shortly after Anne's birth, and their aunt (the mother's sister) came to the parsonage to help take care of the children. A few years later, the oldest two girls, Maria and Elizabeth, died after becoming ill at a boarding school they attended. Charlotte and Emily had also attended the school, which was later the inspiration for Lowood School in Jane Eyre. After their deaths, Mr. Brontë educated his children at home with the help of Aunt Branwell. They are supposed to have read prodigiously from all kinds of publications of the time, including newspapers and magazines from opposing political sides, and then discussed them while walking around the dinner table.

The siblings did eventually attend schools away from home -- Charlotte and Emily even studied for a while in Belgium -- and the girls worked as governesses and teachers at various times. Branwell tried several occupations that didn't last long. Eventually he became a tutor but was dismissed after probably having an affair with the wife of his employer. Apparently money was always a concern and the sisters were at least partly motivated to publish their novels by the possibility of earning money, although I don't think they ever earned much, if anything.

After Branwell's dismissal, he came home and began drinking heavily. He died of tuberculosis (exacerbated by his drinking and drug use) in September 1848, age 31. Emily died of tuberculosis in December of that same year, age 30. The next May, in 1849, Anne died of tuberculosis while visiting Scarborough with Charlotte. She is the only Brontë not buried in Haworth; we saw her grave at St. Mary's below the castle walls in Scarborough. She was 29. I can't imagine what it would be like to lose all (or the rest) of my siblings within 8 months.

Charlotte lived with her aging father at Haworth and continued to write. She and her sisters had originally published under pseudonyms that kept their initials but made their gender ambiguous -- Currer, Ellis, and Acton Bell -- but Charlotte revealed her identity at some point and became somewhat known in literary circles. In 1854, she married Arthur Bell Nichols, her father's curate, but within a year, she died, pregnant with her first child, at the age of 38.

Her husband stayed at Haworth with Mr. Brontë until he died six years later. He was 81. He outlived not only his wife but all six of his children. I can't imagine that either.

I took the four oldest kids with me to Haworth (bus to York, train to Leeds, train to Keighley -- which is pronounced Keithley! Really! -- and then a bus to Haworth). All four of them have read Jane Eyre -- the boys were surprised that they really enjoyed it -- and Zed, Jacob, and Phin have read Wuthering Heights. "Weird" was their evaluation of that one, and after reading it five times over many years, I have to agree, although I still love it. I think Zed and Phin also read The Tenant of Wildfell Hall or part of it. I read an old biography of Emily Brontë that was free for the Kindle app. I don't know why I haven't read Elizabeth Gaskell's The Life of Charlotte Brontë, since I love her books that I've read.

Now, pictures, after the too many words.

Brontë Parsonage. This is not my photo. I failed to take any pictures of the parsonage or the church.

Walking up the steep little street to the parsonage, we came face to face with this roof, which is slate, I think. Very common here, but not usually at eye level. 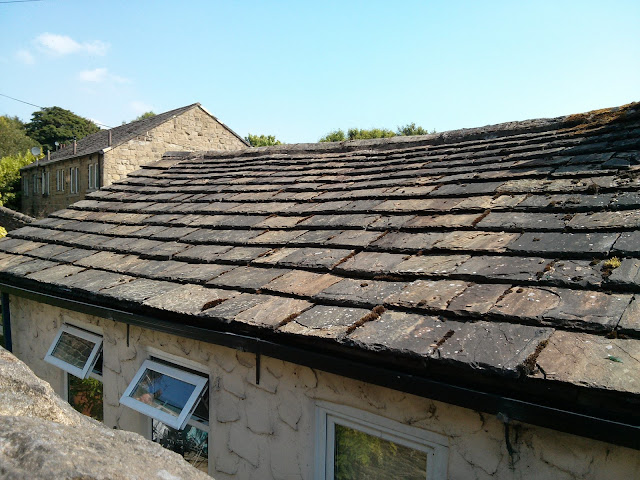 The sign says "WELCOME ... to the smallest shop." The smallest shop in the town? In the street? In the world? It doesn't say, but it is pretty small. Also, notice the funny leaping man on the building to the left. I think it was a sign for a shop called Jack B. Nimble. 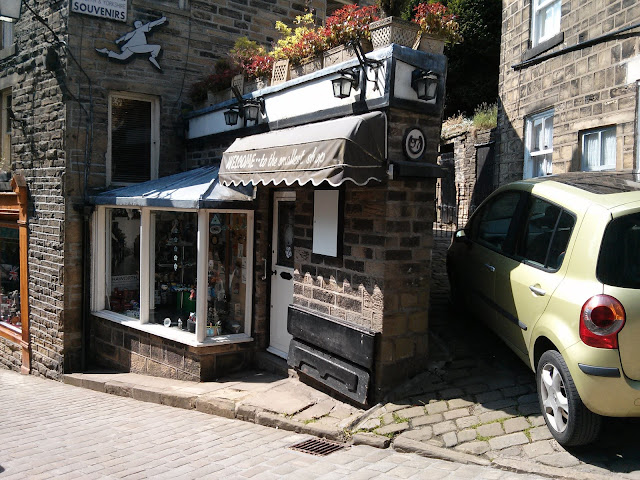 The Brontë Chapel in St Michael and All Angels Church in Haworth, where Patrick Brontë was perpetual curate. 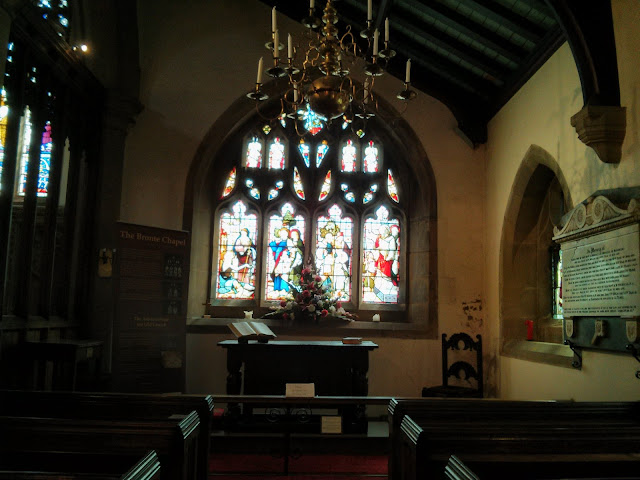 All of the Brontës except Anne are buried under this section of the church. 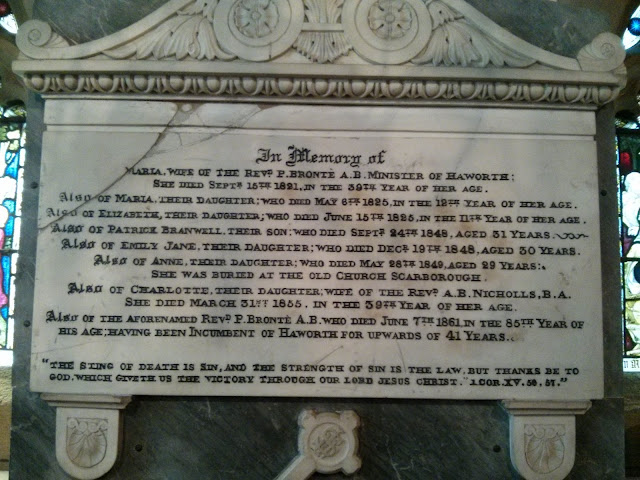 The graveyard between the church and the parsonage. There's a whole story about what an unhealthy place Haworth was and this graveyard was part of the problem: it's estimated that about 40,000 bodies are buried there. The horizontal gravestones in the front were part of the problem, as they didn't allow for proper drainage or something(?), and later they started using upright ones in the back. 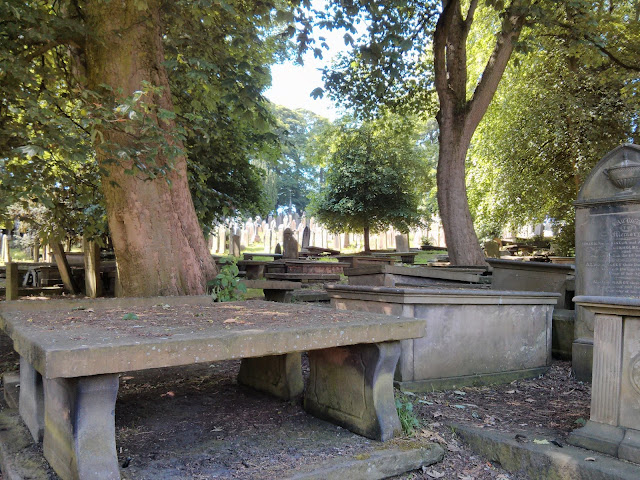 Lillian and Jacob in a meadow behind the parsonage. 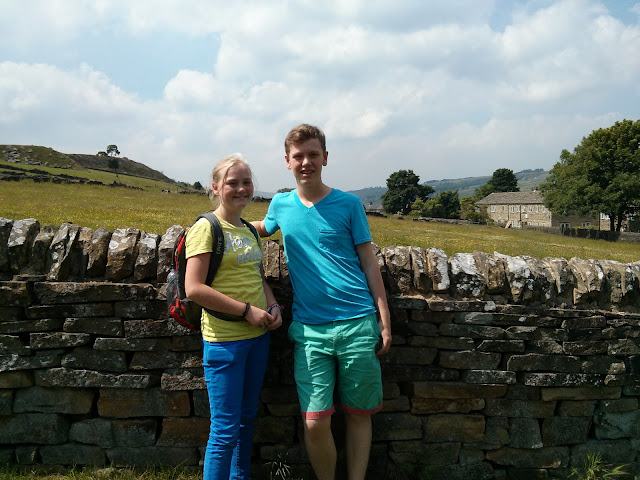 A dry stone wall, built with no mortar, just cleverly interlocking stones. Dry stone walls can last for a very long time. This one is not very pretty, but it's old, probably from the 17th century. 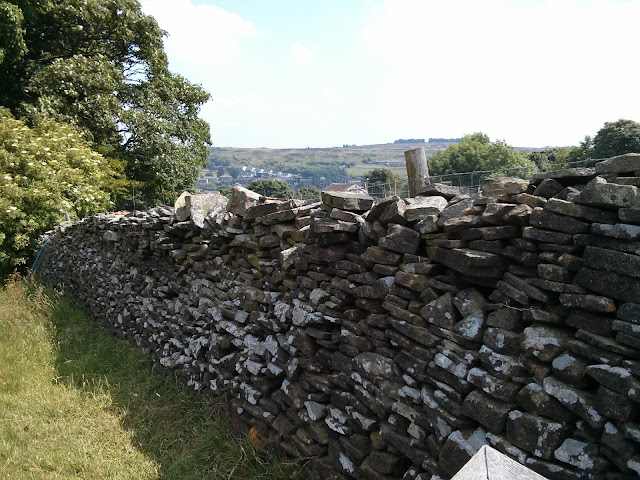 Zed, Phin, Jacob, and Lillian up on the moors. 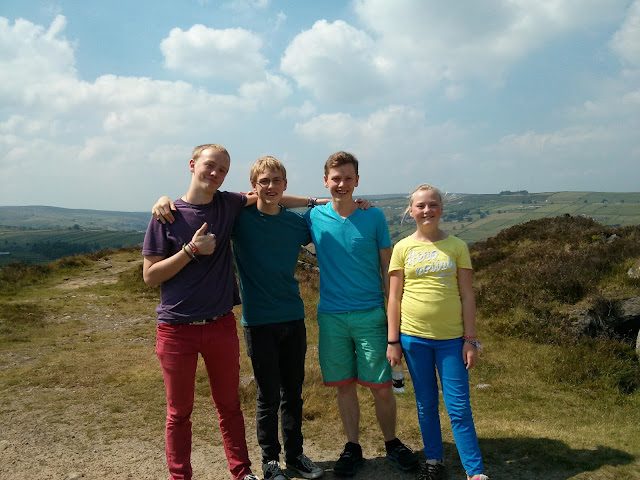 From up on the moors, maybe 1/2 mile from the parsonage. The Brontës would have walked up here often. 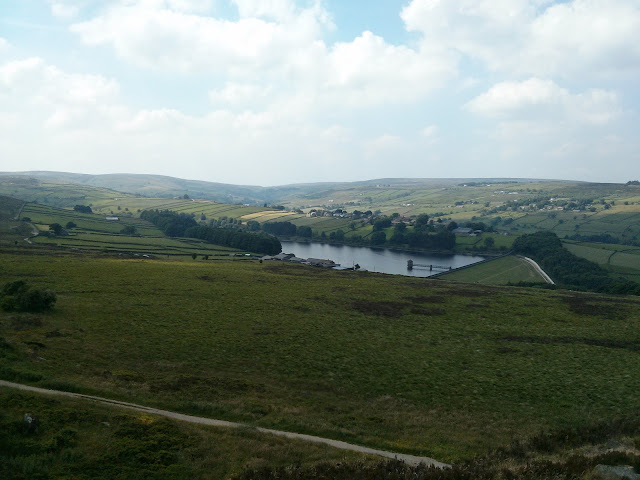 Another dry stone wall. This one looks newer, but still no mortar that I could see. 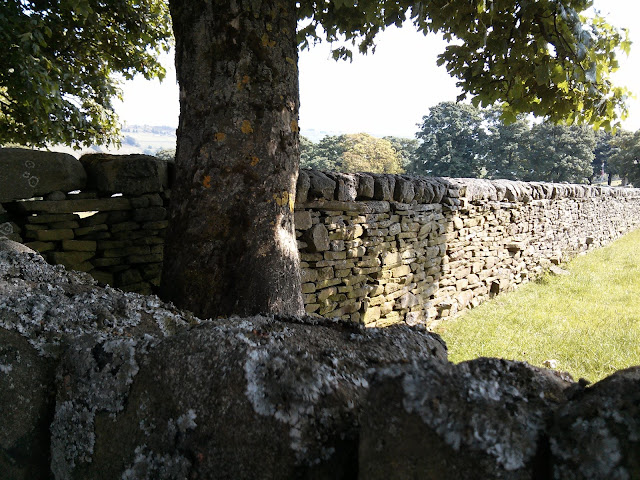