A movie with the girls and walking with Phin

On Saturday, the girls and I went to see Hledá se Nemo (Finding Nemo) in 3D and dubbed in Czech. First, the dubbing was excellent and the Czech-speaking actors sounded just like their American counterparts. Dory still sounded exactly like Ellen DeGeneres, just in Czech. Second, we didn't understand much, but many parts were still very funny. Third, it's a beautifully animated movie and looks great in 3D. (I don't usually choose to see a movie in 3D, but this was only available that way, since 3D is the point of its re-release in theaters.)

The boys thought about going to see The Hobbit dubbed in Czech, but I think they were probably wise not to go. I enjoyed watching Hledá se Nemo, but by the time it was over, my brain felt pretty mushy and I couldn't bring myself to speak Czech to anyone. It was just a bit taxing. And of course, The Hobbit is almost three hours long and probably had way more difficult language in it.

Sunday night, Phin and I set out to go to mass at St. Vitus cathedral in Prague Castle, but I got the time wrong and it was over by the time we got there. (Next week, I guess.) So we walked through the castle, a series of courtyards and alleys between buildings and churches and walls. Then we walked down lots of stairs and took the metro under the river to Old Town Square to see if there might be a mass at Týn Church. There wasn't, but it was nice walking through the castle, down the stairs, and through Old Town a bit. It was misty, sometimes almost raining, and there were plenty of people about. It was fun hanging out with Phin for a while.

Walking towards Old Town Square, Týn Church in the distance. 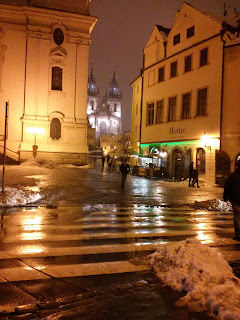 Týn sits directly behind another building. I'm not sure who decided to build things this way. But these are the spires as seen from in front of that building. 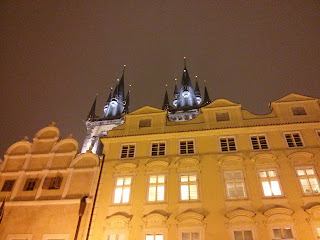 Looking across the square at the clock tower. The side that faces to the left has the astronomical clock on it. 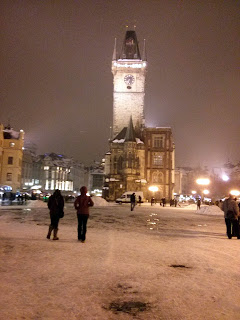 Phin in the groovy metro station. They all look like this, but the colors vary. 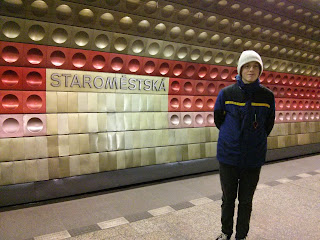