I'm really enjoying using public transportation here. For about $34 each, we bought 30-day passes that allow us to ride the metro (subway), trams (electric, above-ground streetcars, like Trax in Salt Lake City), and buses all over Prague. Mira rides for free with her very own ID card. (We were delighted that they were willing to use a four-year-old passport photo of her for the ID, and it's good until she turns 10.) This totally beats what we were paying for gas in Idaho (usually $400-$500 a month), which of course doesn't count the other costs of owning cars -- oil changes, tires, repairs, etc. Granted, we traveled a much larger area in Idaho, driving to Idaho Falls and Rexburg at least a few times a month. Here, we're enjoying the advantages of living the city life, too, so the comparison isn't really fair. But I'm not trying to be technical here, I'm just enjoying Prague's public transportation!

Here we are on the bus to Zličín yesterday.

There's a cute Czech baby in the video! The kids like that you can stand or sit and sometimes Mira does both, many times, in the course of one trip.

By the way, there is indeed an easy way to get to Ikea (I knew there would be!) -- a bus that travels every 6-8 minutes between the metro/bus station and the shopping center on the other side of the highway. Ikea was not our main focus this time. We needed to buy a new sled for our landlord's family, because we broke one of theirs (of course), so we were headed to Tesco Extra, which reminds me very much of Target. But first, we went to Ikea and the kids played one of those XBox things that "sees" you in front of the TV -- no controllers! I have to admit that it was pretty cool. 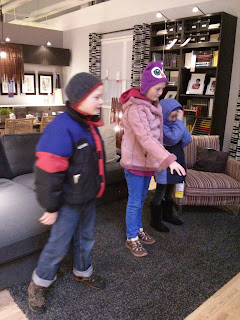 We also ate Swedish Meatballs, since Seth claimed he had never had them before. The lady at the counter was eager to speak English to me, which she did before I even got the first word ("švédský") out of my mouth. Her English was great and she seemed delighted to use it.

And here are Lillian and Mira on the tram that runs very near to our house, #22. 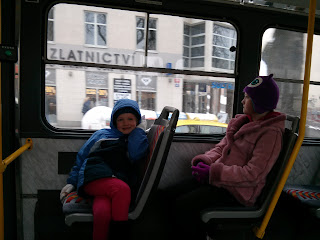 And Seth on the same tram. 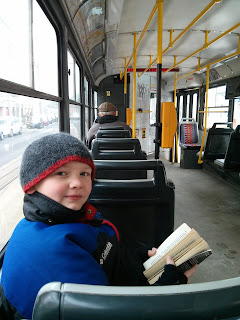 He really likes to bring a book and read it while we travel. I like to look around, listen to people talk, and mutter the stop names to myself and also the phrase "next stop" in Czech: "příští zastávka." I'm getting pretty good at it, and I'm sure it's not weird at all to hear an American woman mumbling "next stop" to herself over and over.